You can’t turn on the television, read a magazine or use public transport without seeing a celebrity advertisement.

These endorsements are big business and brands are desperate for celebrities to showcase new products to their adoring fans.

We all know that celebrities are paid to promote products; Beyoncé and Cheryl Cole certainly aren’t recommending L’Oreal for fun!

Yet it is becoming increasingly difficult to decipher an advert online, especially when it’s originating from a celeb’s personal account.

These Twitter endorsements have certainly been causing debates in recent months and has seen celebrities, such as Rio Ferdinand, Kim Kardashian and Charlie Sheen, facing accusations of breaking advertising standards.

Facebook Ads and Promoted Tweets are easily recognisable as advertisements due to their layout and labelling.

However, Twitter endorsements from a celebrity can be deemed as misleading as it is not made clear that the celeb has been paid to tweet about the product.

This has caused the Advertising Standards Authority (UK) and the Federal Trade Commision (USA) to investigate these types of tweets and state that adverts made via a celebrities Twitter page should incorporate the hashtag “#ad”.

But, this raises the question of how to uphold these regulations and where to draw the line when it comes to celebrity endorsements.

What if a celeb was simply tweeting their love of their new shoes or favourite restaurant without payments or promoting their own brands, television shows or records?

Are Celebrities Selling Out?

A Dispatches documentary on Channel 4 recently highlighted how celebrities tweeted for cash, and it seems that no one was surprised or shocked by this revelation.

Many twitter users were aware of the practice and thought it naive to think that celebrities were not getting paid for their participation in tweet advertising. 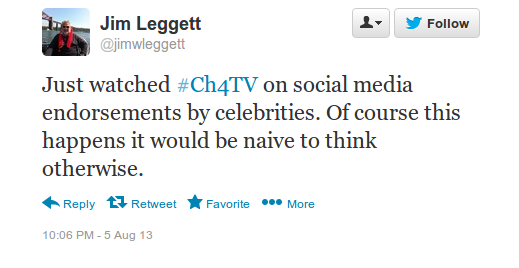 It seems that although celebrities are breaking ASA rules, tweeters are now savvy enough to realise that the tweet is not always a celeb’s own opinion. However, even when celebs use the #ad it can sometimes receive negative reactions from their followers.

A recent example is that of Kate Thornton whose advert for Weetabix received a cold reception by her followers. Many stated they would unfollow the star and said it was “shameful” of her.

Kate’s tweet abides to the ASA and FTC guidelines on social media advertising. However, there are many celebrities who are breaking the rules on Twitter.

Wayne Rooney was reprimanded for tweets about the sporting brand Nike last year, and was recently brought in front of the watchdog again due to the unclear nature of the marketing tweet.

Wayne has now started to use the approved hashtag.

Justin Bieber’s tweet about the flower delivery company 1-800-flowers demonstrates the power that celebrity tweets can have to help raise awareness of the brand.

Having been retweeted 75k times and become a favorite to 51k users, the post gained a vast amount of impressions. 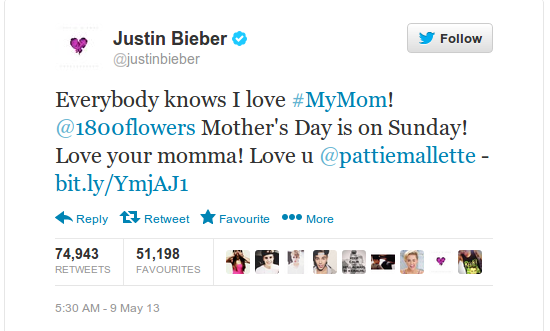 Yet there is no mention that Justin endorses the brand and it seems many of Justin’s young fan base are unaware that the tweet had been constructed as part of a marketing campaign for Mothers Day.

The area of social media regulation will always be one that is hard to enforce. There is currently a lot of grey areas when it comes to the concept of online marketing, especially via Twitter.

We are certain that the debate surrounding these types of endorsements will continue and celebrities will flaunt the regulators rules in favor of a big paycheck.

Like Michael Jordan’s Nike endorsement in the 1980s, sometimes celebrities and companies deem the rewards as greater than the prospect of punishment by regulators.