What social media conversations can tell us about the changing craft beer culture.

As far as big beer brands go, Sam Adams may seem like a toddler in the deep end. But among craft beers, it’s a giant in a kids pool.

When Sam Adams was first launched in 1984 as a craft brew, rich flavor is what set the Boston beer apart from other “flavorless watery beers” on the market. But today its wide variety of flavors and extensive distribution might be working against its reputation as a craft beer.

Has Sam Adams grown too big to be considered craft beer or has what we consider craft beer itself changed? Thanks to an evolved palette and sophisticated taste, consumers are demanding more from their beer, and they are looking beyond popular beer brands to quench this thirst.

To find out, we analyzed the millions of social media conversations about beer — both micro and macro — to better understand how consumer opinion around craft beers in general, and Sam Adams specifically, has changed since 2010.

To start, let’s look at how the social media conversation around beer has changed in recent years.

What do consumers look for in a beer?

It’s impossible to talk about the rise of craft beer without talking about the increasing variety of options. This, of course, means the proliferation of IPAs, stouts, shandies and more — but it also relates to flavor.

For decades, American beers were relatively uniform. Large breweries throughout the country processed millions and millions of similar-tasting cans, and consumers drank them up happily.

But, recently, beer has undergone a renaissance, and smaller breweries have carved out niches for themselves by producing rare, bold and creative flavor profiles.

And social media has become a hotbed for discussion about this growing variety.

When consumers post to social media about beer, flavor is a prominent discussion topic. But what can we learn more about their favorites? Well, going by social media conversations, coffee and fruit-flavored beers lead the way. 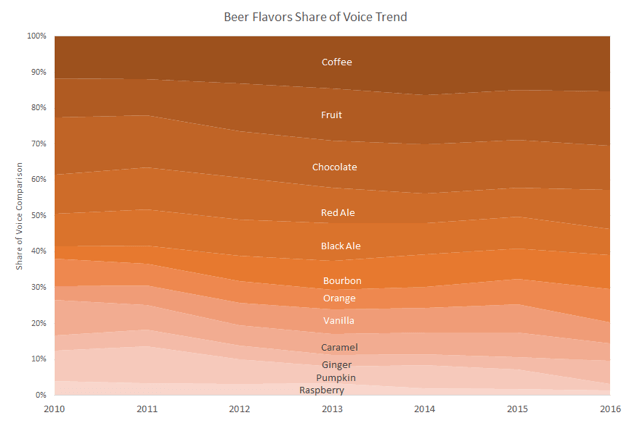 Flavors correlate with the words consumers use to describe beers. The word ‘bitter’ appeared frequently when describing beer, interspersed with adjectives like ‘sweet’ and ‘sour’. This discussion around flavor furthers the conversation to local brews and craft beer. 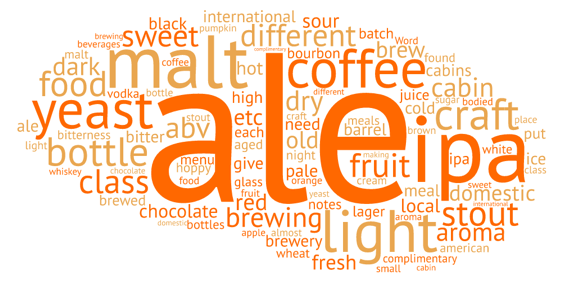 Research done by the Brewers Association and Nielsen found that about a third of self-proclaimed “craft drinkers” said they “always or often” sought to buy a beer that they had never heard of before.

The discussion about craft beer isn’t just talk — social post volume about craft beer has risen with the number of operating craft breweries. According to the Brewers Association, as of 2016, craft brewers encompass 12.3 percent market share of the overall beer industry.

This sizable market share didn’t always exist — just six years ago, the number of craft breweries was less than ⅖ of what it was in 2016. The precipitous growth can be attributed to the rising consumer demand for unique flavors and support for local brewers, as mentioned earlier. 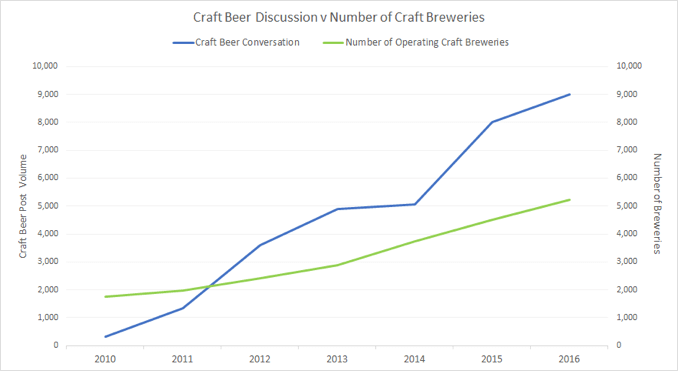 Craft beer is starting to permeate my other buying habits. Just realized I unknowingly took my car to @FirestoneTires bc of @FirestoneWalker

The rise and fall of Sam Adams

Let’s get back to craft beer’s standard bearer for a second.

Consumers today may associate craft beer with eclectic flavors and local brew pubs, but back in 1984, when it was first launched, Sam Adams essentially created the market for craft beer.

Right from the first batch of beer brewed in the kitchen by its cofounder, Jim Koch, to contributing 1% to the country’s total beer market, Boston Beer has come a long way. And, Sam Adams has grown too big to be called craft beer.

On paper, craft beer is classified as such if the annual production volume is 6 million barrels or less and if it’s ownership is independent from a brewer who owns or controls 25% or more stake in an alcohol-related company. In 2010, this production limit was raised from 2 million to 6 million barrels to continue accommodating Boston Beer in the club.

But as it grew more popular among a wider audience, Sam Adams was pitted against bigger mass market brands like Stella Artois, Coors Light and Heineken.  When we analyzed the five most discussed beer brands on social and sorted the conversations about them by common descriptors like affordability, high quality, and wide selection, Sam Adams emerged as a top contender in this category, but nowhere close to its craft beer cousins. 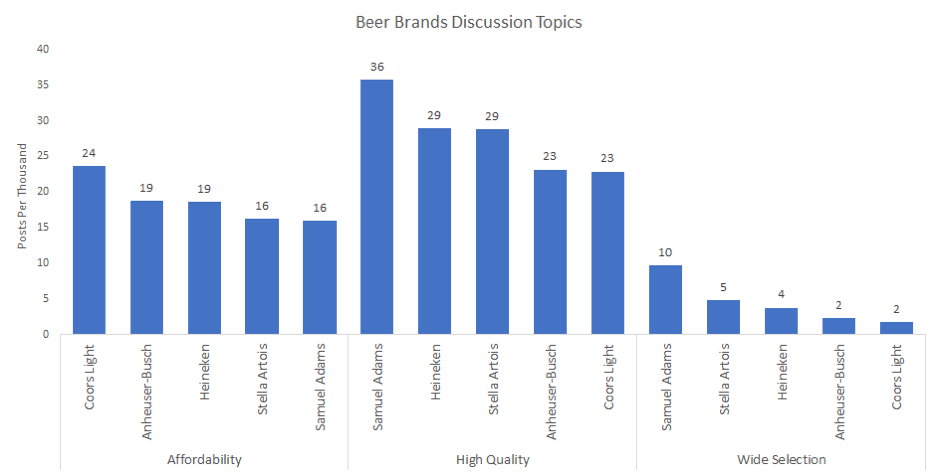 The beer is lauded by consumers for its quality and is sought by those seeking different flavors. The beer wins the crowd not only with its seasonal beers, but also gets a lot of mentions for having a wide selection.

Relaxing at home with a Sam Adams cranberry lambic I forgot I had bought. Their varietals are one of the reasons I love their beer so much.

Sam Adams has, by far, the highest positive sentiment among readily available beer brands. Consumers love its Octoberfest brew, a beer inspired by the German festival. The Boston Lager is also a favorite among people on social. Overall, a wide variety of brews and tasting opportunities at their breweries contribute to Samuel Adams’ positive sentiment.

However, this positive sentiment has done little for Boston Beer. The company has been battling declining sales — In 2016, it faced a 6% drop in shipments to 4 million barrels as demand dropped across the spectrum for its core Sam Adams beer brand, Angry Orchard cider, and the craftier Traveler and Coney Island Brands.

“New craft brewers continue to enter the market and existing craft brewers are expanding their distribution and tap rooms, with the result that drinkers are seeing more choices, including a wave of new beers in all markets,” Chairman and founder Jim Koch told Fortune.

As craft beer fans are always on the lookout for something new, the surge in craft beer’s popularity has piqued people’s curiosity in the brewing process, leading to experiments with homebrewing.

Homebrewing is still a far cry from acquiring the scale of a big beer brand, but, as consumers become familiar with brewing techniques and develop a nuanced appreciation for quality and flavor, they are more inclined to switch to homebrews — a trend that puts brands like Sam Adams further on guard.

Brand perceptions in the consumer’s eye keeps evolving with the next novel thing in the market. But within social media conversations, brands can find hints telling them how the winds might change. This is a part of a larger series on consumer packaged goods.