I love the holidays. I love the smell of cookies in the air, people are nicer during this time of year and the movies make me happy.

But while many traditions remain, entertainment around the holidays has changed in recent years and I thought I’d use Brandwatch Analytics to take a look at how things have shifted.

Hallmark is known for starting the holiday movies right after Halloween and have been the leader in 24/7 movies for years. We tracked mentions of the Hallmark Channel and Hallmark Movies and Music Channel using their own hashtag #CountdowntoChristmas, as well as related terms.

What stood out first was one viral tweet that sums up the Hallmark movie format that has brought them success for years.

Does every Hallmark Christmas movie have the same plot?

Am I still going to watch them and act surprised when Susan falls in love with the small town baker who only wears sweaters instead of falling for the big city CEO?

Hallmark has become known for using a certain “formula”, and to be fair it has brought people happiness – 93% of sentiment-categorized mentions are positive! 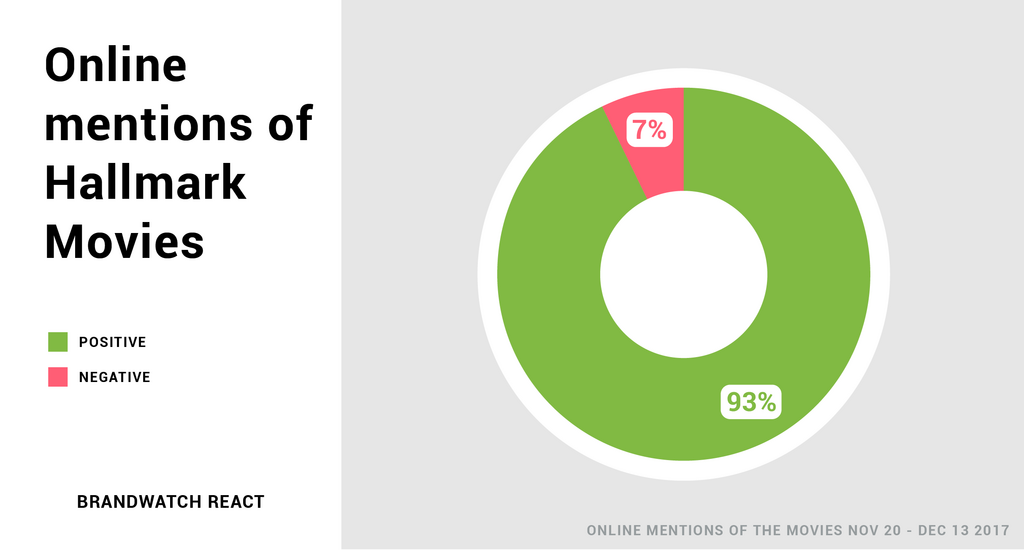 The movies are associated with all sorts of lovely Christmas activities.

Spent a few days planted on the couch watching #Hallmark Christmas movies in order to finish this #BabyAfghan and today I gave it away! * * #crochet #babyblanket #aghan #babyafghan #crocheting #CountdownToChristmas #MostWonderful

Walking in a winter wonderland…. ?❄️️??I hope you're all having a fabulous Saturday, currently doing laundry & watching Hallmark Christmas movies with my princess ??? I'll have new videos for you angels next week! ??

Since Hallmark has seen this success year over year it’ll come as no surprise that other brands are trying to get in on the action.

The Brandwatch React team has made a list and checked it twice: Check out the definitive list of the best Christmas movies according to tweeters.

A Christmas Prince: A royal reaction?

Netflix has decided to create its own original Christmas movie called A Christmas Prince and, naturally, we wanted to look at all the mentions surrounding it. How would it compare?

Interest in the movie has grown rapidly since it was released. To the 53 people who've watched A Christmas Prince every day for the past 18 days: Who hurt you?

As you can see, the tweet was seen by basically everyone. It’s got a very similar tone to the Spotify campaign from last year in which the brand also targeted a small group of their users on their odd habits, and it too went viral.

There’s certainly an argument to be had over whether releasing data like this is a bit too creepy.

Comparing both of these brands over the last few weeks, Hallmark and Netflix began with a healthy competition when it came to mentions. Hallmark dominated the conversation on November 23rd, Thanksgiving. I attribute this to many people being at home in their turkey comas wanting to watch something easy and not wanting to start an argument about what to choose to watch on Netflix.

Then after the start of December came, and especially when Netflix sent the aforementioned tweet, the streaming company began to dominate the conversation.

Both brands have had major success with their holiday movie campaigns but is the future of Christmas movies streaming them whenever you want or will Hallmark keeps its audience engaged 24/7? 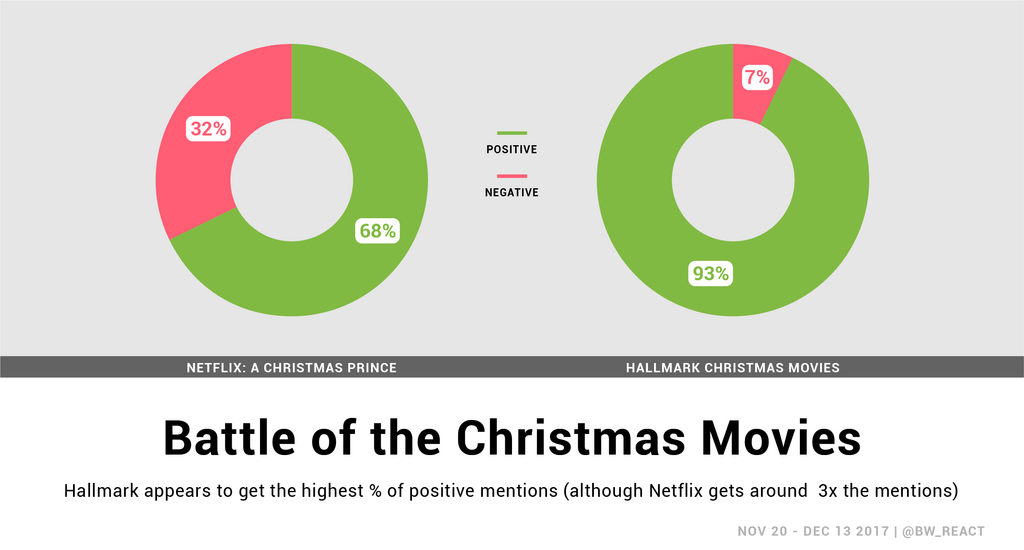 It seems like Hallmark are a bit less controversial than Netflix, even if Netflix are eating up all the buzz.

My predictions are that the streaming services may continue to take over the conversation but they will not take over the 24/7 networks. There is something reliable and possibly comforting with the 24/7 network. I understand people may be used to the ease of streaming during the year, but the 24/7 network is even less effort in some ways. You don’t have to think about what you want to watch – the decision is made for you!

In my mind, the 24/7 network will reign for the foreseeable future.

I think my biggest question for next year is whether people will get sick of the “formula” or whether we’re all just suckers for the happily ever after stories. I’m sure you can guess where I stand.