Could now, this time of turmoil and global strife, be Crocs’ moment of redemption?

Crocs. One of the most famous shoe brands in the world, but mainly for the wrong reasons.

Crocs have been derided constantly since they garnered international attention in 2006.

People of all backgrounds and stripes called them ugly and hideous. People set up websites dedicated to hating them. For a long time, you would not be caught dead in them for fear of open ridicule.

But 2006 was an eon ago. Think of how much has changed since – how different the world is in 2020. Could now, this time of turmoil and global strife, be Crocs’ moment of redemption? 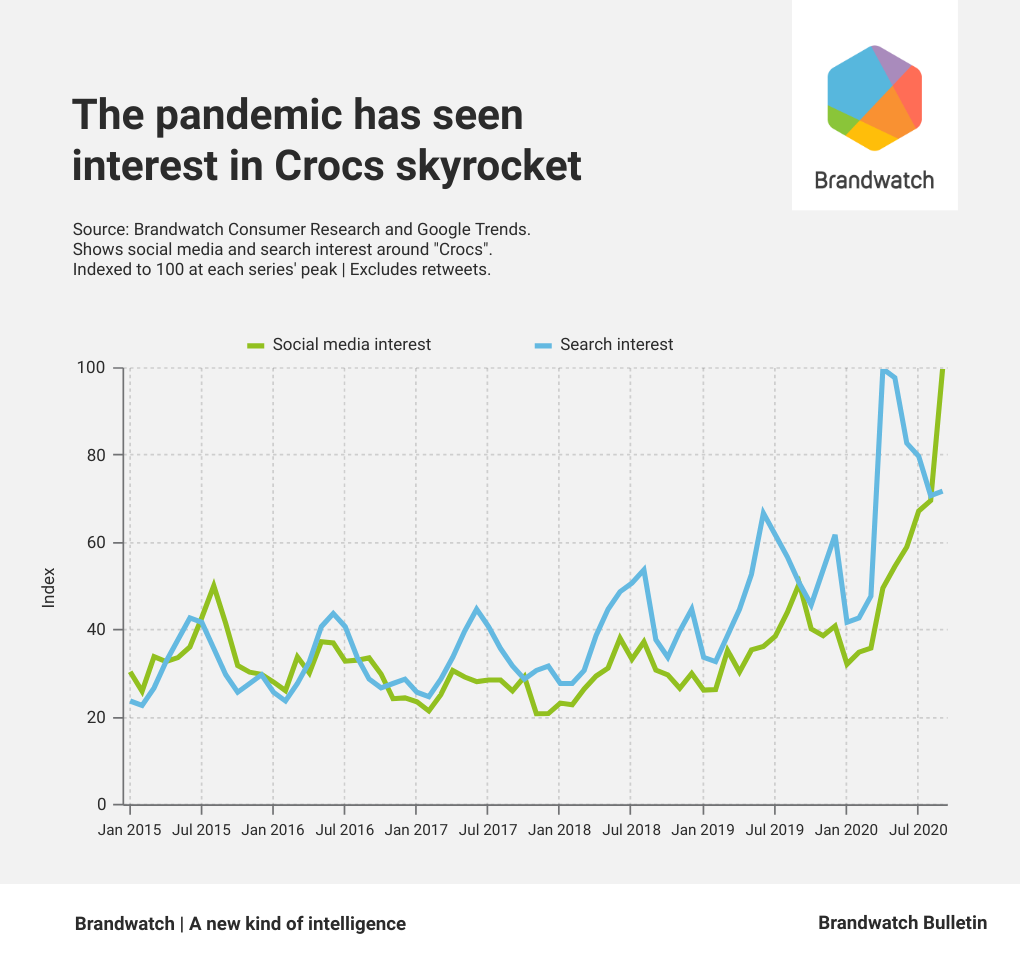 We hit peak Crocs this year, for both people searching for them on Google and posting about them on social media. We found 615k unique authors posting about the shoes between January and September this year. That compares to 397k across the same period in 2019.

But as we already said, Crocs get a lot of negative attention. Are we just seeing people taking out their frustration on a classic cultural punching bag? 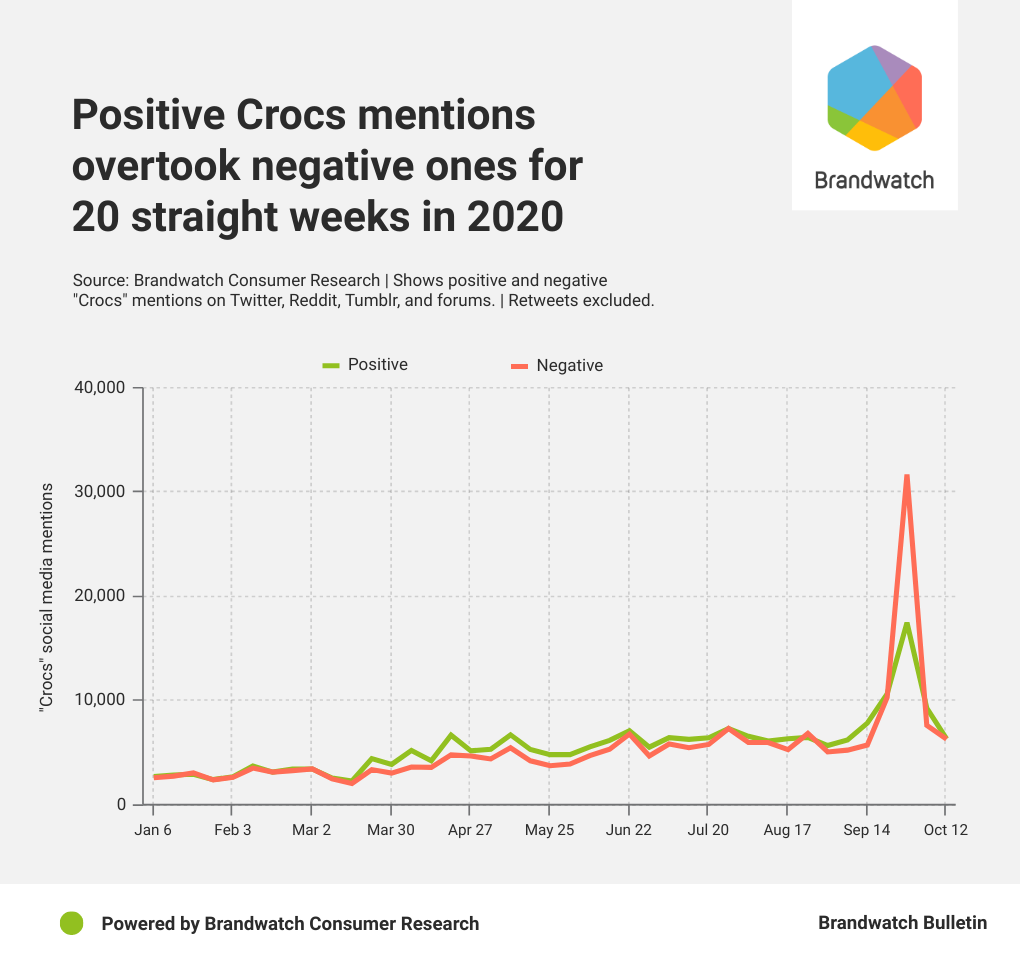 Since January 2015, positive Crocs mentions have rarely outnumbered negative ones. But after the pandemic was declared in March, it’s happened nearly every week.

That is a major shift for the brand, and one that’s even more important when they’re getting more attention than ever. The question is, what happened?

The pandemic, and lockdowns, played a big role. For a start, we were indoors a lot more. We didn’t need to dress up or worry so much about how we looked to other people. In other words, functionality increased in importance, while style went the other way. And while Crocs are known to be ugly, they’re also known to be incredibly comfy.

Suddenly, Crocs sounded like the prime choice for pandemic footwear.

As a company Crocs also contributed to the rise in positive mentions. To support healthcare workers around the world, they announced they’d be sending out tens of thousands of free pairs. This was really well received, and the company has since given out over 800k pairs to workers in the US, UK, India, and beyond.

Crocs have also branched out to partner with actors, musicians, and celebrities. Priyanka Chopra worked with them on distributing free shoes in India, while Ruby Rose and Post Malone have collaborated with them to create and design their own Crocs.

You could dare to say that the shoes were becoming cool, and stranger things have happened in fashion.

But the eagle-eyed among you will have noticed the sharp increase in negative mentions in the week commencing September 28 in the chart above.

That week saw the most negative mentions of Crocs we’ve ever found in our data, going back to June 2010. The cause? Too many people wanted to buy them.

As part of another collaboration, Crocs released a pair of shoes made with the musician Bad Bunny. After going live online, they sold out in just 16 minutes. Cue people posting on social media about missing out, which in turn caused a backlash from people fed up with hearing about them.

Chances are, the company will be happy to take that flak given how many sales they racked up. And it appears this is the case – they recently teamed up with Justin Bieber. Upon release, his shoes took 90 minutes to go. Whether that’s due to less popularity or more stock, we can’t say.

In any other year, the idea of Bieber Crocs selling out in under two hours would be mind-bending. In 2020, it’s par for the course. Who knows what the remainder has in store for us.

This analysis originally appeared in the Brandwatch Bulletin. Subscribe here to get the latest insights straight to your inbox.