React: We Analyzed Your Dream Tweets and This is What we Found

Pizza? Romance? Donald Trump? We've delved into the world of dreams, analyzing patterns in the dreams that tweeters share online

Did you know that humans spend an average of six years in their lives dreaming?

Did you also know that hundreds, sometimes thousands, of people tweet about their dreams every day?

We tracked mentions of dreams over a month, returning 44,000 individual tweets excluding retweets.

What did we learn? Well, mainly that people have really weird dreams. But we also found fascinating patterns in tweeted dream reports that we just had to share.

We also asked popular dream expert Ian Wallace, of IanWallaceDreams.com, to take a look at our findings and his comments throughout the post give some sensible context to the whacky themes we found. 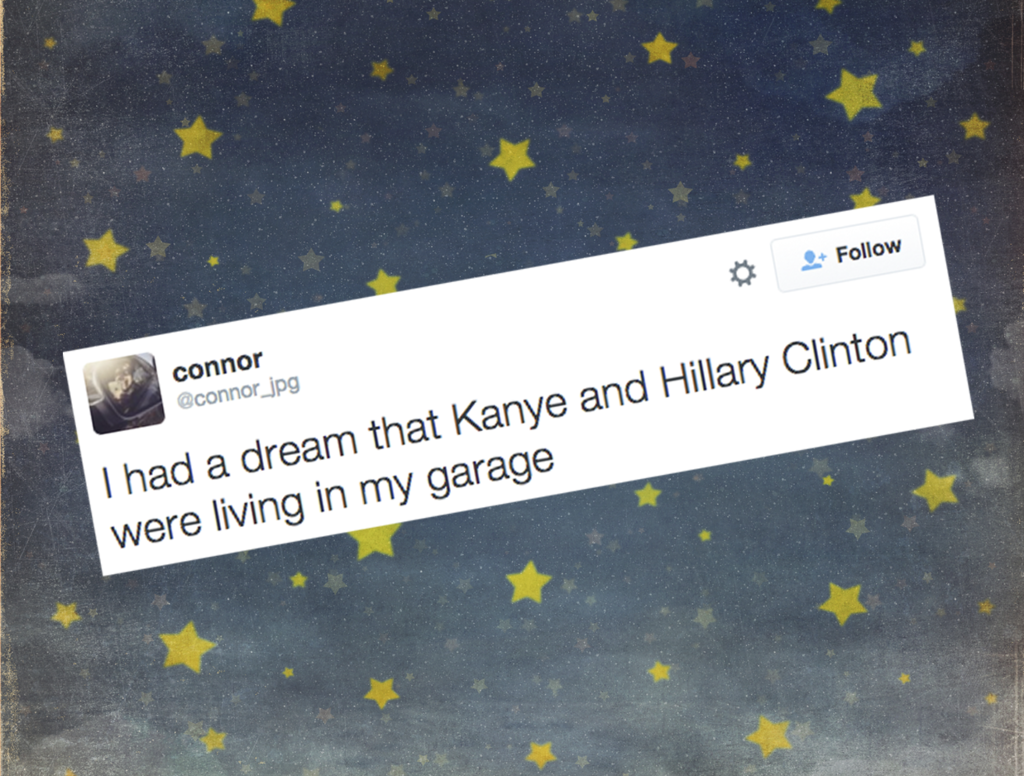 The US elections aren’t just dominating the public consciousness, but our collective subconscious too.

Oddly enough, Donald Trump appeared in nearly 700 of Twitter’s reported dreams over the month, and when we compared him to all other Presidential candidates we found that he was officially the dreamiest.

Dream expert Ian Wallace says he’s not surprised by Trump’s appearance in so many of our dreams, particularly since the connotations of the role of President have meant that charismatic candidates like Bill Clinton and Barack Obama featured heavily in people’s dreams during their respective Presidential campaigns.

Bernie Sanders and Hillary Clinton followed closely as the second and third most dreamed about candidates respectively, while Jim Gilmore, John Kasich and Martin O’Malley were the only candidates who didn’t appear in any tweeted dreams. 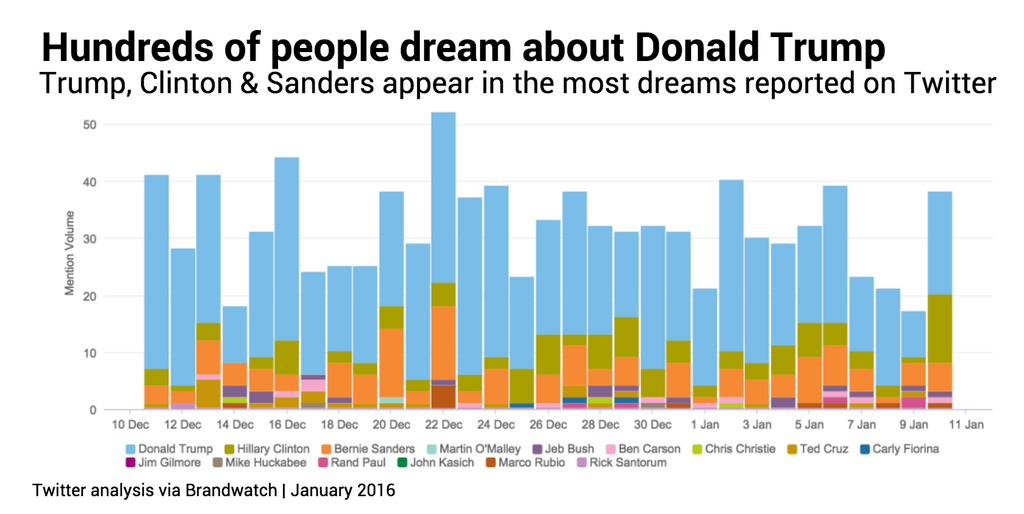 Because of their wacky nature, dreams are difficult to break up by sentiment (especially with such a large dataset), so knowing whether each candidate’s appearance in people’s dreams is indicative of their potential performance in elections is pretty impossible.

Despite that, it was fair to say that our dreamiest candidate appeared in a few nightmares.

While looking at sentiment wasn’t too insightful, we were able to break down tweeters dreaming about Presidential candidates by gender, revealing that, while most dream appearances are fairly evenly split, Marco Rubio is a hit with the ladies.

Meanwhile, Carly Fiorina, Chris Christie, Rand Paul and Rick Santorum only featured in male tweeter’s reported dreams (though to be fair they collectively accounted for only seven of the hundreds of Presidential candidate dream mentions we found, so that doesn’t tell us much).

Pizza is love, pizza is life

Unsurprisingly, food is a theme present in many people’s dreams.

We had a look at reported dreams surrounding popular food types and found that pizza is the king of dream food, with tacos and burgers tying at second. The three food types received 270, 268 and 268 mentions respectively for the period we analyzed. 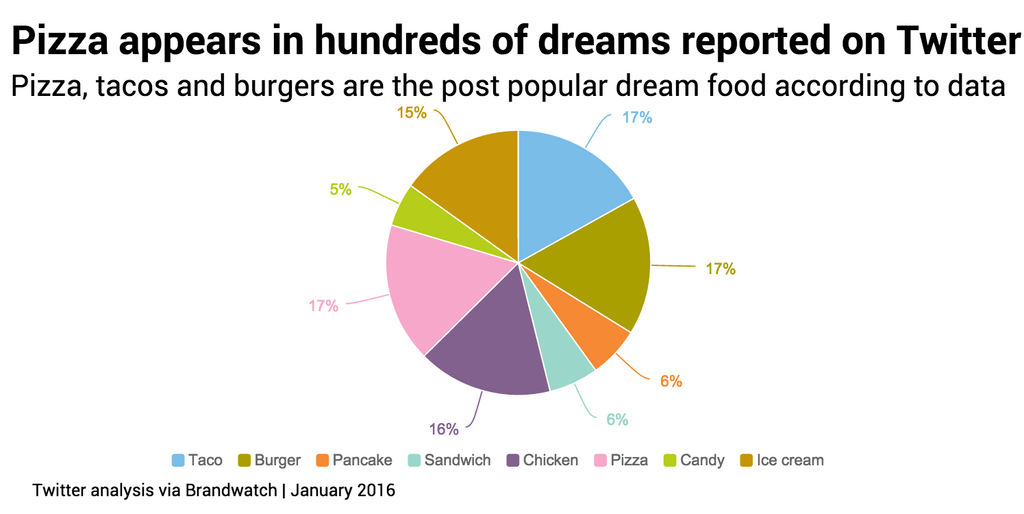 Pizza cravings in all forms featured in our pizza dream tweet collection, and many actually came true when tweeters woke up and turned their sleepy cravings into real purchases.

I just had a dream about pizza. Now I want pizza.

While pizza might be the most popular type of food, things look a little different when we look at the top food brands.

According to Ian Wallace, it might not just be hunger that drives our sleepy pizza obsessions.

“Food symbolizes the dreamer’s ability to achieve their ambitions and fulfil their appetite for success in waking life and a fast food, such as pizza, in a dream suggests that the dreamers are seeking quick fulfilment of their ambitions rather than taking a little bit more time and effort to achieve something more valuable and sustainable.”

We took nine of the biggest fast food franchises in the US and saw how they fared in our dream calculator. 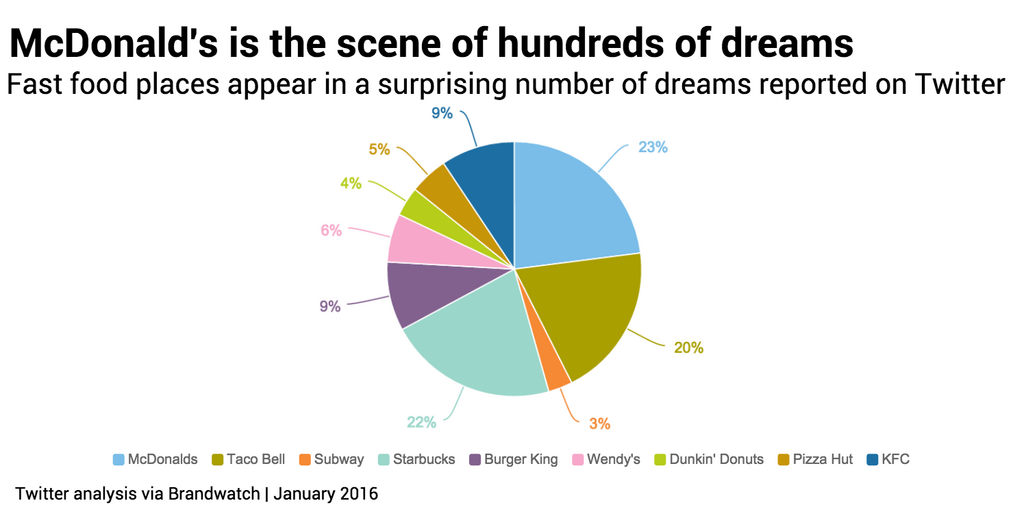 McDonald’s was the clear favorite, with nearly 150 dreams reported in the month we tracked.

I had a dream last night I got a mcdonalds breakfast, now I’m about to go follow my dreams!

Despite pizza being the king of all dream foods, Pizza Hut accounted for only 5% of mentions of the popular restaurants in reported dreams.

Perhaps a crowded pizza marketplace has divided our collective subconscious love of it.

Wake me up when it’s all over

While politicians and food played a huge part in what people dream about, we decided to analyze tweets about waking up too.

We took our 44,000 strong dream tweet collection and searched for key terms surrounding waking up to see what kind of emotions people experienced when they awoke from their tweetable dreams.

The results were somewhat disturbing.

Combined, we found 525 mentions of tweeters waking up crying or feeling sad.

In fact, negative emotions made up the overwhelming majority of wake-up tweets, with happy (which included mentions of “excited”, “brilliant”, “amazing” etc) just a small fraction.

While the findings may look depressing, Ian Wallace offers some consolation to the sobbing tweeters.

“Dreams are not just a stream of imagery but also a flow of emotion and the dreaming process is the main way that humans make sense of their emotional life. Waking up sad or crying from a dream indicates that the dreamer has the opportunity to explore some really positive and healthy aspects of their life that they are currently ignoring or feel may be unacceptable to the people around them.”

It’s not all that bad then.

Do you share your dreams on social? If so, how do they fit in with our data?