What the Rise of Online Sports Streaming Means for Traditional Broadcasters

Can traditional broadcasters survive the rise of online sports streaming? We take a look at what the future may hold for the industry.

In an age of Netflix and on-demand streaming services, sports events are arguably the last bastion of traditional television.

Live matches bring people together in a way that almost feels quaint, whether we’re huddled on the sofa watching the Olympics or in a crowded bar for the World Cup.

Recent news, however, threatens to upend this ritual—though for fans the consequences might be less unsettling than for traditional broadcasters, especially those working under the subscription model.

Facebook has just launched a new partnership with the USA’s Major League Baseball. The social media platform will stream 20 games to its users for free. Each Friday throughout the season, fans nationwide will be able to watch the games without the usual blackouts that restrict access in certain regions.

In April this year, Amazon announced plans to stream the National Football League’s “Thursday Night Football” games, nabbing the rights from Twitter in a deal with the NFL worth $50 million. 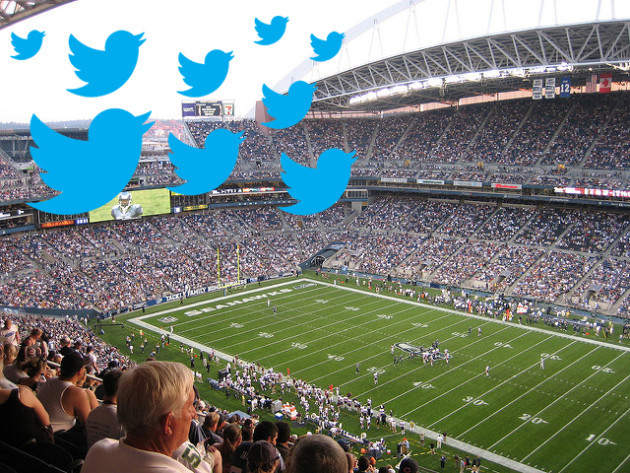 Netflix Data: Analyzing the Reception of House of Cards Season 5 on Social

The Brandwatch React team takes a break from real world politics to analyze the social data surrounding the House of Cards Season 5 launch.

Generally, sports governing bodies control the rights to sporting events. Back in the days of limited TV competition, those rights would go to the highest free-to-air bidder—for example, in the UK, the BBC or ITV.

This all changed in the early 1990s with the advent of satellite and cable, and the rise of subscription television. Thanks to anti-monopoly laws, sports subscription packages have become fragmented, so consumers end up paying for a lot of sport they don’t actually watch.

The fact that social media and web-based platforms can offer major league sports games for free represents a significant challenge to television broadcasters.

“Over the last three or four years, the big pay TV companies, who have enjoyed a cartel to some extent, are finding themselves under pressure from the new kids on the block—social media and OTT services,” says Boyle.

The one-size-fits-all bundle model is breaking down, with pay TV broadcasters looking to secure revenues from different packages, such as smaller bundles or offering free access to entice new subscribers.

The very real threat from OTT services is compounded on the sponsorship side.

The likes of Facebook and Amazon can offer targeted advertising at a scale and accuracy television broadcasters can only dream of. Plus, as Boyle points out, “Sponsors like the free-to-air element, because they get such broad reach. Pay TV, on the other hand, goes out to a much more niche audience.”

Likewise, sports governing bodies want to both maximise their revenue from subscription TV deals and at the same time increase the visibility of their sport. In the past, this has been something of a balancing act, but as OTT services gain traction, they potentially present a win-win solution.

Social media especially is built for the kind of real-time interaction that happens during a sporting event.

And while the financials of the MLB deal remain under wraps, the benefits to Facebook are manifold, with increased user base and engagement adding value to advertisers.

As brands battle for attention in a cluttered online environment, being part of the conversation is crucial. For sports this means both live coverage and social media engagement.

To survive in a complex landscape of increased competition and social media savvy fans, broadcasters need to up their game.

“Television remains the core financial underwriter for sport,” concludes Boyle. “But as social media and OTT increasingly defines itself as television, the lines are becoming blurred.”