Is Novak Djokovic as disliked as people seem to think? Data journalist Andrew Singer examines social data surrounding the talented tennis player who doesn't seem to get any love compared to his rivals.

He’s the number one tennis player in the world, the reigning Wimbledon, U.S. Open, and Australian Open champion, and 15-time Grand Slam winner.

He gets bad press.

His endorsements are underwhelming.

Even Japan’s 7th-ranked Kei Nishikori had better endorsements than Novak.

Brandwatch tracked online mentions over a recent 8 month period and that found, yes, he is less popular than other top players – but he may be closing the gap. 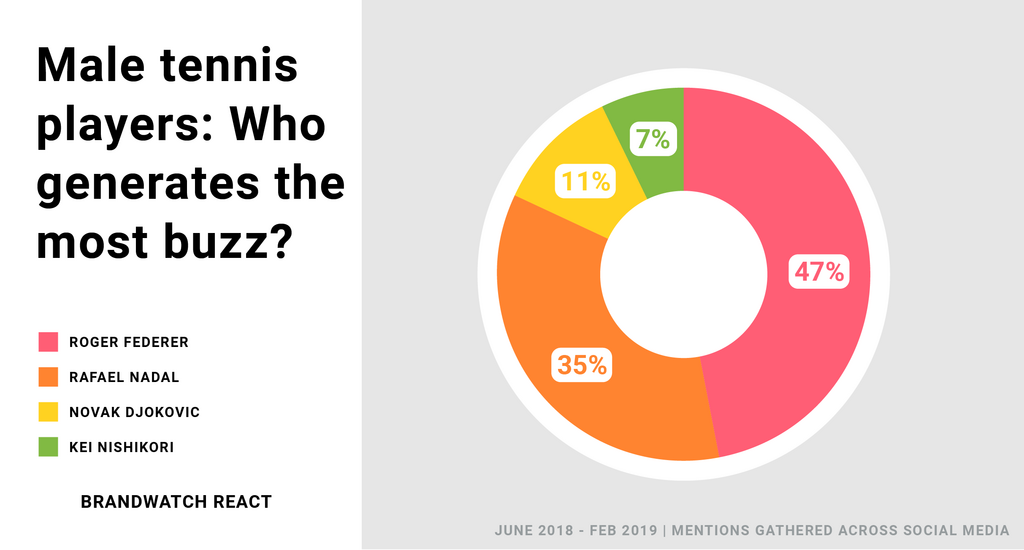 Federer gets more than four times as many mentions as Djokovic, while Nadal has more than three times Novak’s number.

Still, the public may be warming to the 31-year-old Serb. Brandwatch’s sentiment analysis below suggests Novak isn’t so far behind the ever-popular Federer in terms of positive opinion. 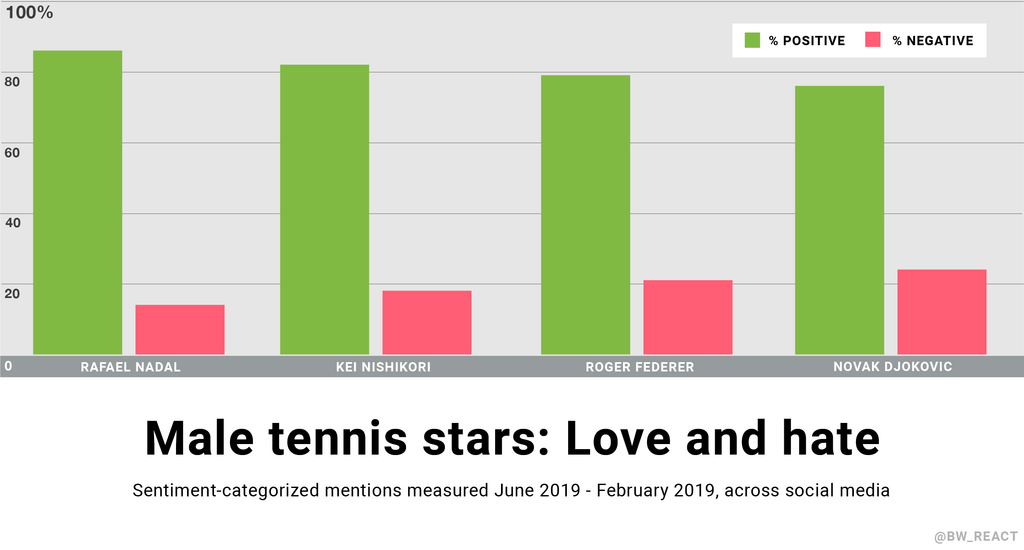 24% of Novak’s mentions were negative – not so much worse than Federer’s 21%. Meanwhile, few have a bad word to say about Nadal – only 14% expressed negative sentiment about the 11-time French Open champion.

It probably didn’t hurt Novak that our analysis concluded immediately after the Australian Open (January 27, 2019) which he won in a romp. The Serb currently holds three Grand Slam titles, and people usually warm to their champions (up to a point). Federer has been in the doldrums recently, flaming out of the Australian Open in the 4th round.

Nadal, for his part, advanced to the finals  of the Aussie Open where he was dispatched easily by Novak (6-3, 6-2, 6-3). The enigmatic Nishikori, meanwhile, remains an icon in Japan even as he disappoints fans with his frequent match retirements. He withdrew again in the quarter-final of the Australian Open after trailing Djokovic 6-4, 4-1. 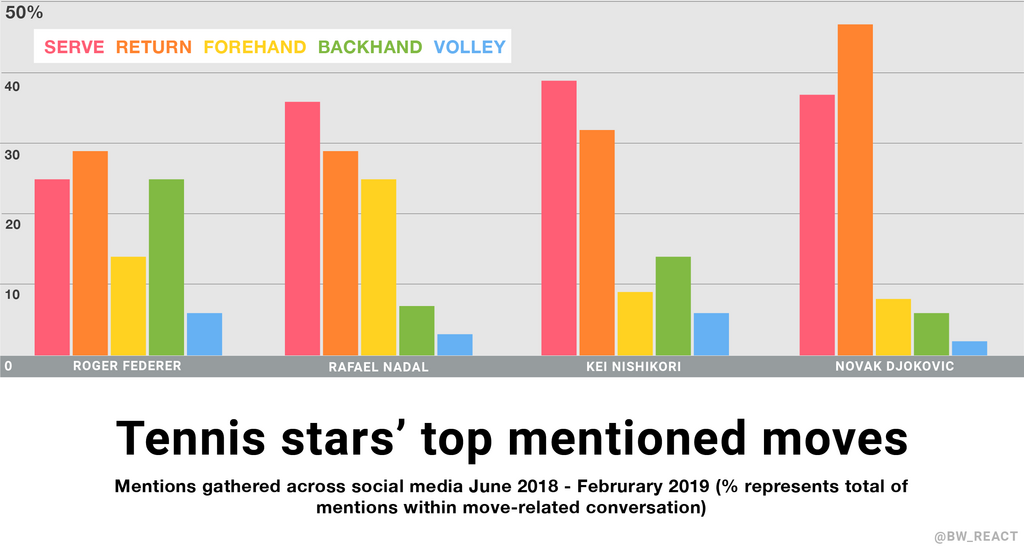 The results attest to Federer’s all-around game. Comments are fairly evenly distributed among the Swiss maestro’s five stroke categories. He draws significant comment in four categories: return (29%), serve (26%), backhand (25%), and forehand (14%). Federer’s volley share is lower, 6%, but it is still as high or higher than the other three men’s.

By comparison, almost all specific shot discussion in Djokovic’s mentions is about his return game (47%) (his return of serve is exceptional) and his serve (37%).

It is puzzling that Djokovic’s two-handed backhand, perhaps tennis’ best, gets so little attention – mentioned by only 6% (Novak gets no love…again? )

Are we warming to Novak?

Here are some oft-heard explanations for the general dislike of Djokovic: He tries too hard to get people to like him; his game is too clinical, lacking in novelty; his personality is derivative (i.e., he copies Federer, Nadal, Agassi, whomever), he comes across as fake, he’s often cranky, and so on.

But mostly, it seems, Novak is unlucky. It’s his misfortune to have come along in the era of the Federer – Nadal rivalry, one of sports’ greatest.

As one fan noted:

“Novak has evolved and I believe is now very likeable but it’s hard to change old preferences (with tennis fans). I also think while the two legends are still playing, the die-hard fans will not allow another player to supplant them, This is why, even he [sic] wins 20 Slams, he will be respected, but not loved the same way as Rog or Raf.”

Andrew W. Singer is a data journalist based in New York City.