Data Labs: What Can We Learn About Runners From Public Data?

There’s money to be made where tech meets health and fitness.

Health contributed around half of the best-selling apps in the Apple Store as early as 2013 and it’s growing faster than the app industry average. The UK health wearable tech market is set to double in 2015, as we aspire to lead ever-healthier lifestyles.

Aspire being the operative word. 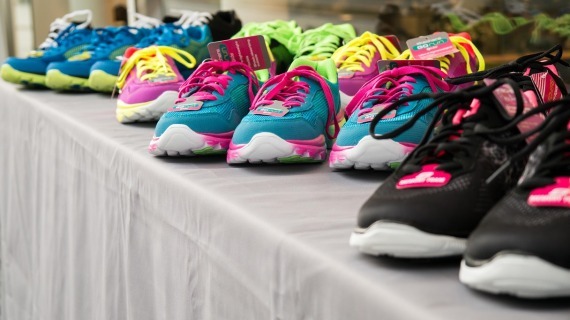 For as quick as it is to download an app, health and fitness ask for longer-term commitment. In this study, I looked at public data from popular running apps to see what separates long-term runners from those who bowed out early on.

Most of us will be familiar with running app Tweets. Mobile apps/devices are paired with accounts so that stats can be shared after running. Within certain circles this leads to competition – a powerful motivator – and outside of them cursors rush to the ‘unfollow’ button.

Regardless, this trend shows no signs of slowing. I captured over 250,000 Tweets from runners keen to share their progress, and split them into two groups.

The focus lies on ‘New Year runners’ – those who started using running apps in January 2014.

It is a level playing field, with no initial differences between those who will and won’t persevere. For this study, ‘short-term’ runners are those who dropped out within the first six months while ‘long-term’ runners persisted throughout the year.

Benchmarking against a control group revealed what these runners have in common:

It turns out, for example, that some professions are over-represented in the running community.

We might expect sports trainers to feature in the top five, but sales, marketing and PR professionals came top of the list. Much less represented in our panel were researchers (putting me firmly in the red), journalists and students. We’ll keep tracking to see how this develops as the market grows.

So what marks the long-term runners? Do they run further, faster or more often? Is this the key to success? 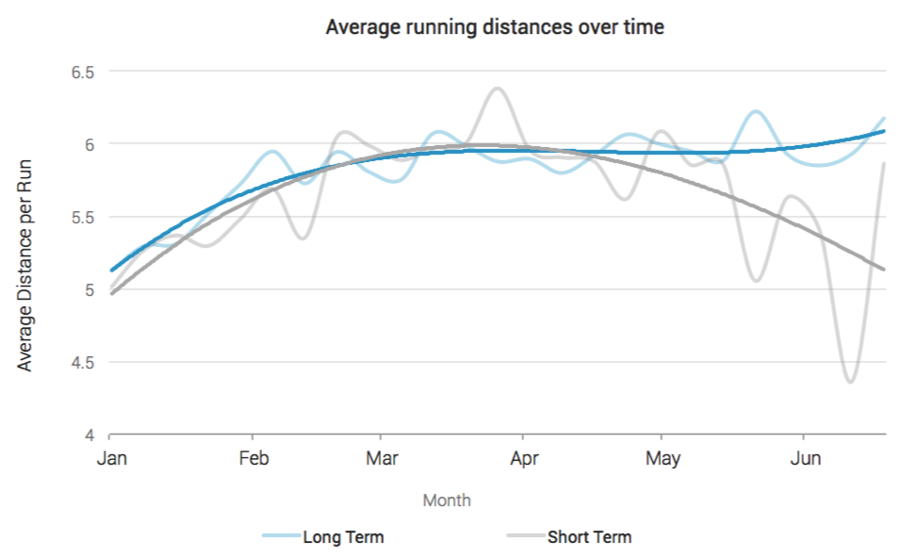 Within the first three months there was no significant difference in running distance or frequency between the two groups (both groups saw their stamina improve).

Where the short-term runners faltered was at a plateau. Three months in, progress slowed and only the long-term runners persevered.

If consistency is the key, another problem comes to the fore.

How do the sales/marketing/PR professionals find time between the office, social calendars and home lives? 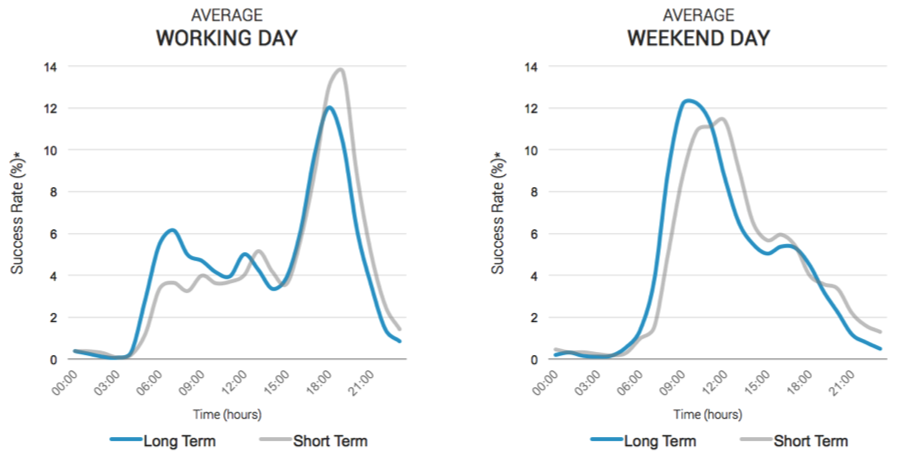 In both camps, rush hour is early evening between Mondays and Fridays and mid-morning during the weekends.

But there are also differences between the two groups. Long-term runners are more likely to exercise on weekday mornings. Even on the weekends, when more authors have more leisure time, long-term runners exercise earlier.

New Year resolutions start with the best intentions. But then it is January, and the snow (nay, rain) makes the whole thing less appealing. 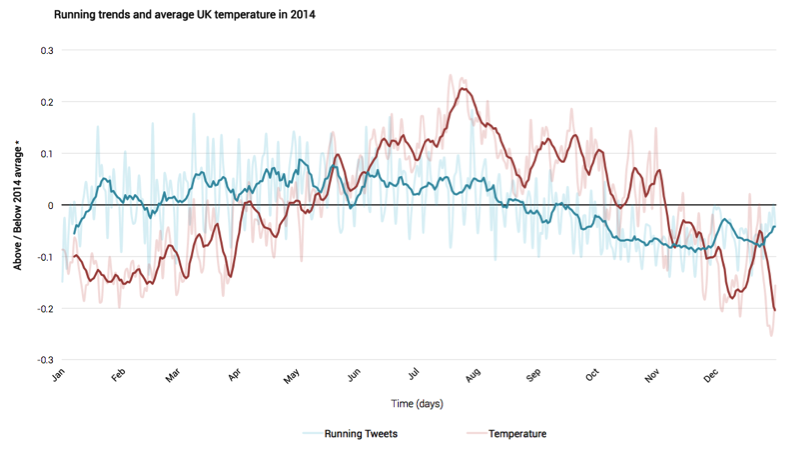 Running Tweets were common whilst temperatures rose throughout spring and summer.

However, from August onwards when temperatures began to drop, so too did the volume of running app Tweets. Temperature was not as strong an indicator as temperature direction. Despite lower average temperatures, authors were more active in spring (with summer approaching) than in autumn.

No negative correlation was found between running rates and precipitation: if it’s raining, take a jacket or hit the treadmill.

So, what have we learned?

• The first ten days count. For New Year runners, drop out rates are high during the first few weeks. 10 days in, success rates are up by 50%.

• Runners plateau 3-4 months in. At this stage improvements in stamina are smaller on average. For many short term runners, this poses a challenge for motivation.

With marathon season in full swing, are you one of the runners? If so, good luck. And take a rain jacket, just in case.