Over 32,000 Tweets a Minute – The Champions League Final

So, Chelsea have finally done it. Nine years after Russian billionaire Roman Abramovich purchased the blues, the most important trophy in club football is on its way to west London after a dramatic penalty shoot-out victory over Bayern Munich.

The win was witnessed by nearly 70,000 in Munich’s Allianz Arena and an estimated 295 million around the world on television, including those at the G8 conference. With social media monitoring increasing in importance for these type of real-time events, we decided to concentrate our attention on Twitter.

Almost half (48%) of all tweets about the match on Saturday were posted during the 2 hours and 49 minutes of game-time, highlighting the growing importance of monitoring live Twitter updates at large events.

Figure 1 shows the minute-by-minute Champions League buzz on Twitter between 19:00 and midnight on Saturday.

Excitement about the match bubbled throughout; updates about the action were posted at an average of more than 7,500 tweets-per-minute during game-time, with this rising profoundly during periods of high drama.

Striker Didier Drogba’s bullet header to equalise for Chelsea generated more than 28,000 tweets at 21:31. The action on Twitter then died-down during extra time before the scintillating penalty shoot-out again dragged users to their online devices.

Drogba’s winning penalty at 22:31 and corresponding congratulations for the London club generated an average of more than 24,000 tweets-per-minute in the subsequent 10 minutes, peaking at 32,097 tweets in the 60 seconds from 22:33.

Buzz about the match subsequently dissipated, although thousands of tweeters continued to post about the occasion every minute until long after midnight.

With offices in both the UK and Germany, Brandwatch was also eager to determine in which country these tweets were posted. 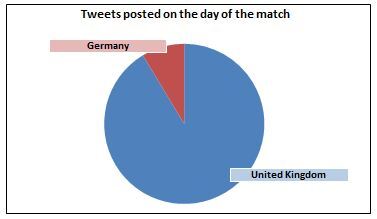 Figure 2 shows that the vast majority of Twitter updates posted on the day of the match were from accounts in the United Kingdom.

Given that more than a third of content posted in Germany was also in the English language, could this suggest that Chelsea fans were tweeting whilst at the match, are residents in Germany, or that Bayern fans were simply magnanimous in defeat?

Figure 3 shows common terms used by those tweeting in English from German locations on the day of the match. The cloud shows that this conversation was dominated by Chelsea-oriented messages.

So, it’s congratulations to Chelsea, champions of Europe. With a fascinating summer of sport upcoming, including the Olympic Games and the European Championships, the Brandwatch team will be providing more minute-by-minute analysis of sporting events, lauding the social media champions of 2012. Watch this space…