Every Chipotle lover remembers the old days of waiting in long lines, sometimes out the door, dying to sink their teeth into a burrito (and MORE than willing to pay extra for guac).

But it’s no secret Chipotle’s popularity has been going downhill; between E. coli and Norovirus outbreaks, rodent sightings, and stock prices plummeting, it seems like this Mexican food chain can’t catch a break.

I will always be a loyal Chipotle customer. There’s a location approximately 100 steps from the Brandwatch New York office, and the employees there see a lot of me. But the line is never out the door anymore, not even close. I couldn’t help but wonder what insight social data could provide on this brand’s perception – so I decided to do some research.

I’m going to go over how the conversation has changed over time, the key topics emerging in the discussion, and then deep dive into one of Chipotle’s biggest audiences to see how their marketing strategy could be altered to fit their needs.

How much has Chipotle’s popularity decreased over time?

Well, according to social data available through Brandwatch’s Unlimited Historical Data, a trend line of social conversations dating back to May 2014 shows a steady decline in social media mentions of the burrito giant over time. Peaking at 250K mentions in May 2014, Chipotle garnered only 110K mentions in August, 2017. That is quite a difference.

Okay. So we know the buzz has died down a bit. But there’s still a considerable number of consumer conversations that Chipotle can listen to. Let’s dig deeper.

How do people feel about Chipotle?

Let’s take a look at the past two months and leverage some sentiment analysis.

Key topics in the negative conversation at that time included Chipotle shares falling and rodents falling from the ceiling in a Dallas Chipotle restaurant. Not good.

Here’s what the negative conversation looked like over that whole time frame. Much of it surrounded people getting sick.

What are the main talking points?

Now we know which issues are driving the negative conversation, but are these topics making a big splash overall?

I used Brandwatch Analytics to measure and compare the most popular conversation topics I extracted from the data. 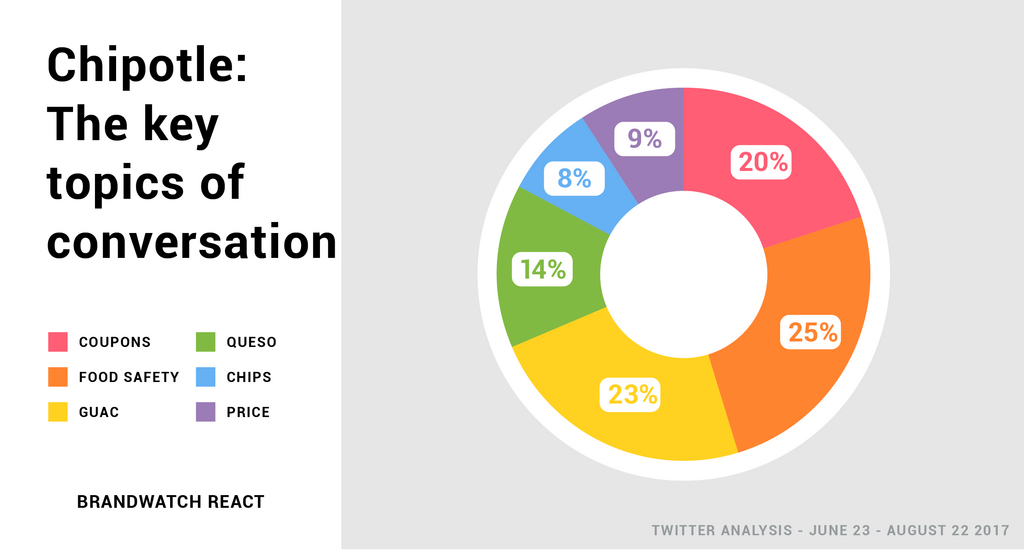 Unsurprisingly, I found that food safety issues are dominating the wider social chatter around Chipotle. Queso and coupons are also common points of discussion. (Chips and guac are so 2015.)

Then I asked, do different demographics care about different things?

I used Twitter demographic data to break these buckets of conversation down by gender.

My findings suggest that women are more concerned with coupon offerings and food safety, while men are more interested in Queso. It trumped any health hazards for this tweeter, and nearly 6,000 re-tweeters agreed.

If you think Chipotle introducing queso will make me forget about their repeated food safety violations, you're absolutely right https://t.co/KTEj2wvNVq

Sounds like Chipotle is winning back some love! But it may take more than Queso to get them back on top.

So far, we’ve investigated the historical shift in social popularity, analyzed sentiment drivers, zoomed in on key conversation topics, and considered how audience gender plays into these areas of focus.

Understanding the individual Chipotle consumer at a deeper level

Let’s switch gears a bit and tap into Brandwatch Audiences. Audiences does what it sounds like. It helps you find people and group them into an audience based on whatever criteria you like, and then study and compare them.

I started with a simple search in Audiences: Individual Twitter users, located in the United States, who follow the @ChipotleTweets handle. I came up with 268,000 individuals to listen to.

I found that 52% of the audience is classified as female. That does not seem very significant at first, but when you take into account that only around 47% of the total Twitter audience in the US is female, you realize the metric has more meaning.

In addition, 23% of the audience is classified as having an interest in “Family/Parenting.” That’s 64% more likely than the average person on Twitter.

Interestingly, only 13% of the Chipotle followers are students. That’s almost 20% less likely than the average Twitter user. As such, the chain might consider gearing its marketing efforts more towards parents than this demographic, especially for Twitter Ads. 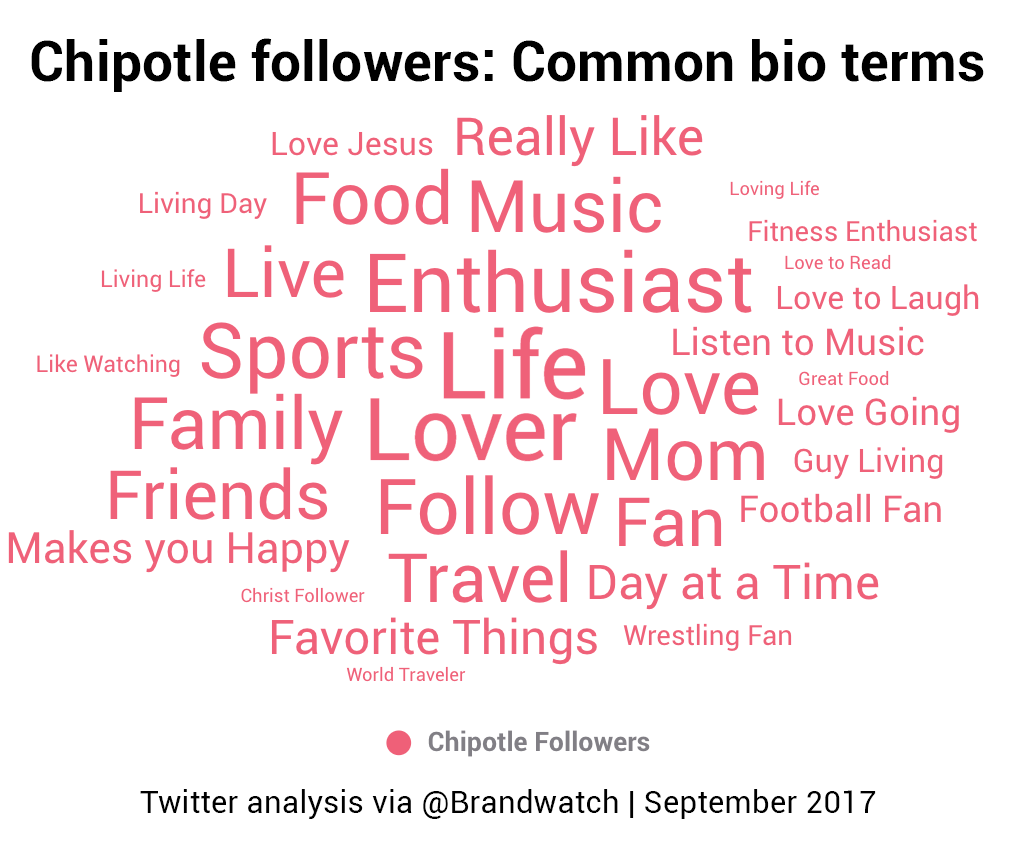 “Mom” jumps out to me immediately.

Mothers are clearly a large demographic of Chipotle’s followers. Our earlier research told us that females are more likely to discuss food safety and coupons. It follows that the chain should offer coupons like BOGO deals and free chips to keep the moms coming back.

But the brand needs to figure out how to assure these moms that the Norovirus and E Coli outbreaks are over. How can Chipotle regain their trust? 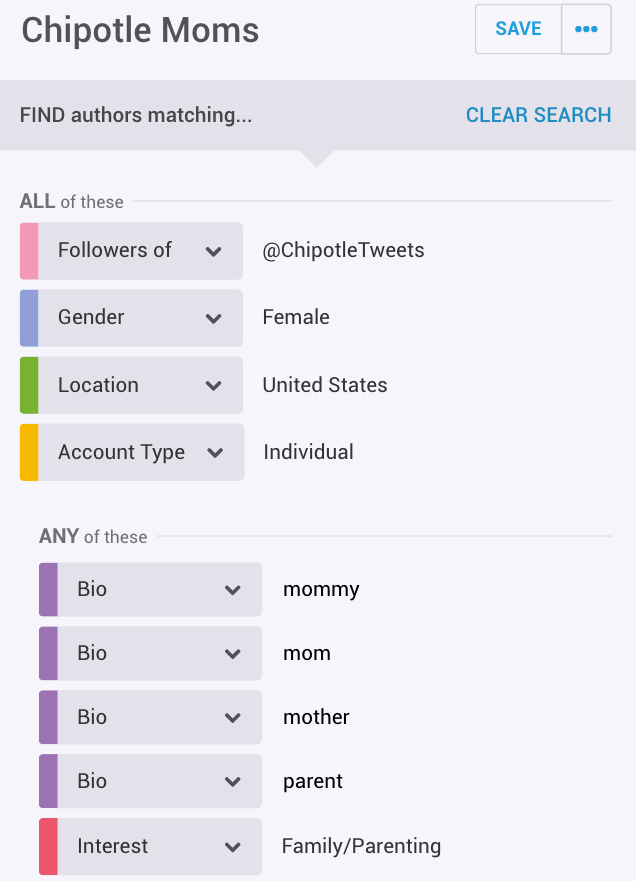 Let’s create a new Audience and call it “Chipotle Moms.”

Now we have a group of 12,000 individual, active Tweeters identifying as moms with a brand affiliation towards Chipotle.

Additionally, we know they are likely to discuss safety issues and promotional campaigns associated with the company. But what else does this group talk and care about?

Using Brandwatch Analytics to listen to these individual’s conversations, I gathered some interesting details about the group.

For example, there was a high level of engagement with “The Toy Insider,” a resource used to find, review, and win toys and gifts for kids. And an influential handle among this audience was @MomTrends, a popular blog offering trends and tips.

CNN was the most mentioned news source among this audience, with more than 1,000 mentions over the past month (including @CNN replies, shares, @Mentions, and Retweets). Interestingly, CNN has published three articles mentioning Chipotle in the past month.

One was about Queso, and two were about the Dallas location closing due to a rodent sighting.

Chipotle has temporarily closed a Dallas location three weeks after a customer posted video of mice inside https://t.co/ePn30MhJrM pic.twitter.com/i3mYsvwfVv

Some other common topics/hashtags posted by this audience include coffee, horoscopes, Game of Thrones, and #Travel. A common interest was sharing recipes across Pinterest and blogs. Further segmentation of the conversation by food-related mentions showed tons of discussion around “slow cookers,” desserts, breakfast, and grocery shopping.

Now we know some of the other things that “Chipotle Moms” care about!

How could Chipotle use this information?

That’s a question for their marketing department, but I’ll throw a few ideas out there:

How about a new cellphone game with fun horoscope quizzes that lets you redeem points for BOGO deals? Maybe you could save up points for toys (with a high safety rating of course)? Maybe a free family vacation as the grand prize?

Breakfast burritos? They could be a big win for this demographic.

Dedicate some ad spend to Game of Thrones?

Advertise on recipe forums, or hold a recipe contest for a temporary dessert? (Rumor has it the chain is adding churros to the menu; way to go Chipotle – the Moms will be happy!)

I’m not sure how insightful the slow cooker conversation is, but in marketing, wording can make all the difference. “Slow cooked pork carnitas” has a nice ring to it.

Grocery shopping is another interesting one. Should Chipotle be offering branded products at your local grocery stores? Panera, one of Chipotle’s biggest competitors due to the similar higher end fast food vibe, has been doing it for years. If I saw Chipotle salad dressing, Pico de Gallo, or guacamole in the grocery store, I would probably jump for joy.

Let’s wrap it up

A little social monitoring can go a long way.

If your brand perception is declining, it is imperative to understand the public perception and make connections with consumers if you want to turn it around.

People have a lot to say about your brand – you should listen.

Are you a journalist looking to cover our data? Email us at [email protected] for more information and requests.