The future is coming, but are we ready for it?

Smart ways to pay, control our heating and send babies to sleep all make our lives easier and the technology that eradicates the need for our attention and effort in annoying or difficult everyday jobs is increasing by the day. There’s an app for everything.

But are there some areas of life that we’re just not ready to see become automated?

We trust our laptops and apps with our bank details and are willing to give up all sorts of personal information to social networks, but are we ready to trust a machine, or at least the people who made it, to get us safely from one destination to another?

With Google claiming to have “self-driven” 1.5 million miles as part of its Self-Driving Car Project, and plenty of other brands getting involved, we took a look at mentions of these cars for the last few months to see what the internet really thinks about the technology.

We found over 600k mentions of “self-driving car” (and related terms) between May 1st and July 31st 2016. It’s a huge conversation that rarely drops below 3.5k mentions per day and is dominated by big brands (you can guess which is the biggest). 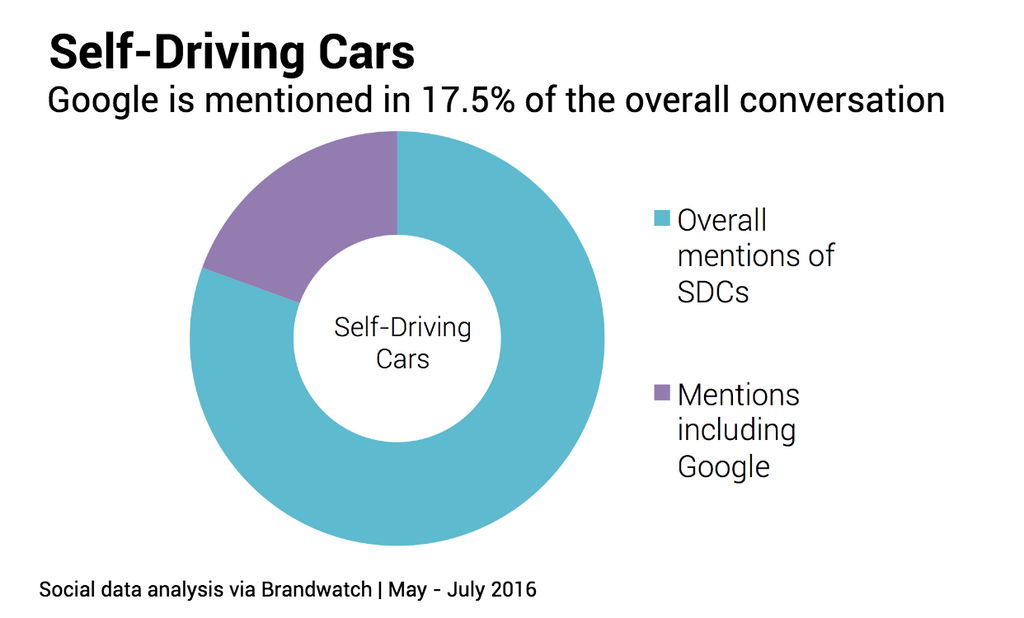 Using the Topic Cloud component in Brandwatch, we identified the top mentioned words and phrases in the overall conversation. It revealed a fascinating breadth of points of conversation online, ranging from brands and business implications to fears and ethical dilemmas.

Whatever your thoughts on them, the possibility of self-driving cars does present a great framework in which to discuss the limits to which we want our lives to be automated, the way we want business to be done, the amount of scrutiny which should go into the programming of life changing technology, the way we want our streets and cities to look and operate, and who’s to blame if it all goes wrong.

Building a self-driving car that can deal with the unpredictable realities of traffic in urban areas is one thing, but there’s a whole world of regulatory and reputation-related issues out there to deal with.

The resources needed to build and sell these cars to a skeptical public are mammoth – meaning the companies making leaps with self-driving cars are some of the biggest and most well-funded in the world.

We took a look at some of the top brands being mentioned in the overall self-driving cars conversation, predictably finding Google at the top. 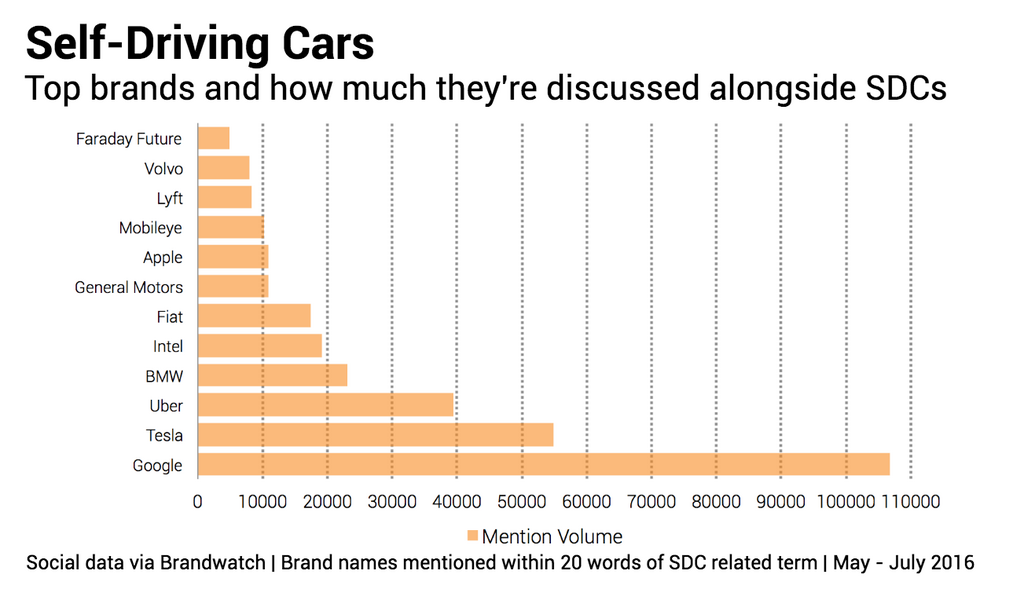 Tesla came in second with Uber just behind it, which is unsurprising. During the time we were tracking mentions Tesla CEO Elon Musk had a lot to say about the role of automation in the future of individual and shared journeys.

Public transport and ride sharing are key targets being eyed up by the proponents of self-driving vehicles, with the automation of transport saving money and space.

It might sound appealing to cash-conscious commuters but we’re guessing this won’t go down well with public transport workers or taxi drivers.

Driverless public transport could see thousands out of the job as commuters opt for cheaper rides in supposedly safer vehicles. There’ll be a lot of anger.

In his latest ‘Master Plan’ Elon Musk described delaying the release of aspects of driving automation would be “morally reprehensible” when it is significantly safer than a person driving by themselves.

Arguments surrounding the morality of self-driving cars on multiple fronts are a huge part of the general conversation, and there are strong views across the board.

Firstly, road safety is one of the key arguments for the development of self-driving cars and is used prominently in the material used by brands that are investing in them. However, in designing machines that will make decisions for us, there are ethical issues that could put many off accepting a ride from one and could lead many to protest their place on the roads.

“Programmed to kill” got a significant amount of mentions across social media, appearing in our topic cloud. It refers to the idea that in a situation where an accident is unavoidable, the car will need to decide who to sacrifice. If you’re familiar with the notoriously difficult Trolley Problem, a thought experiment often used by philosophers of morality, you might see a likeness.

If a crowd of people appears in front of the car and it is unable to slow down will it veer into a wall and sacrifice its passengers in order to save the most lives? If so would customers be willing to pay for a vehicle programmed to sacrifice them if the situation arose?

A long way off?

Ethical dilemmas aside, there are genuine fears about the safety of self-driving cars when it comes to hackers (who could potentially cause them to behave dangerously) and there’s a lot of mistrust about their ability to react to all possible situations. As Henry Petroski of the Wall Street Journal says, building the cars might be the least of developers’ worries – it’s cities, and particularly dense urban parts with construction zones and other complicated situations, that they should be most concerned with.

Not only will self-driving cars need to be ready for all possible traffic situations, cities will need to be equipped to interact with and assist automated vehicles. It’s this interconnectedness that many argue will pave the way for them.

Considering all of the roadblocks in the way, self-driving cars seem a long way off yet. It’s set to be a fascinating journey, though.