Brandwatch analyzes social media reaction to E3 2016, including commentary and social round-ups from each major conference.

We tracked social media’s reaction to E3 2016, including social round-ups of each major conference and commentary throughout.

Jump to a specific conference here or enjoy our conference and game comparisons below. But what about games? We looked at the games mentioned in the EA, Bethesda, Microsoft, Sony, Ubisoft and Nintendo conferences and the number of mentions they got on social media between Sunday and Wednesday. Here’s what we found: Here’s how it went down.

After a bit of a late start, Vince Zampella drove the first significant EA mention spike of the conference as he introduced Titanfall 2. Things escalated from there with the highest volumes occurring towards the end of the conference. A huge (and unexpected) spike occurred 47 minutes in during the EA Originals segment, with this tweet driving a whole bunch of them.

post-Yarny, it is now mandatory that EA trot out an endearingly nervous dude with an cute accent for every new indie game reveal they do

Star Wars: Battlefront was the star of the night game-wise with the announcement of new DLC and a sequel in the works, expected next year. It drove the largest game related spike in mentions on social with over a thousand mentions in a single minute. 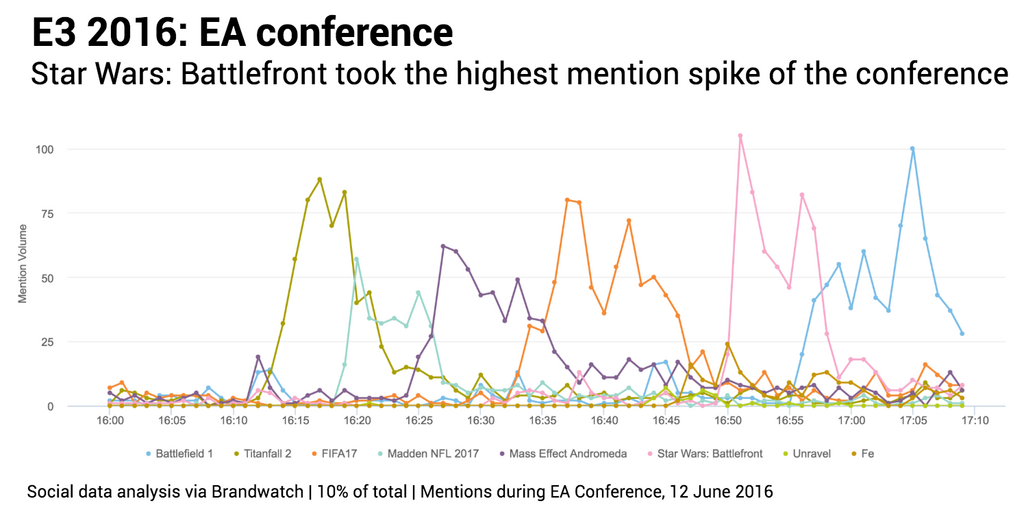 It wasn’t Star Wars: Battlefront that got the most mentions overall, though – FIFA17 sustained hype for the longest period and took a solid 19% of the game related conversation.

An intriguing story-driven trailer focussing on a young “Alex Hunter”‘s journey to football stardom and an appearance from Manchester United manager José Mourinho probably had something to do with that. 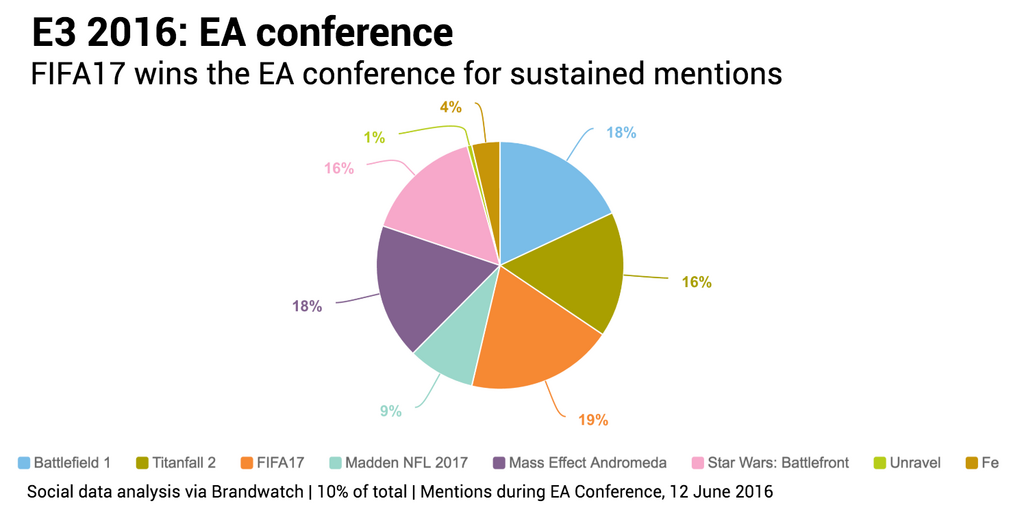 Madden NFL 2017 took one of the lowest numbers of mentions despite a fairly lengthy segment near the beginning.

Unravel got the least, used primarily as a prop to introduce the EA Originals segment and Fe, a new title with a dark but pretty trailer, failed to get much traction on social compared to it’s blockbuster competitors.

This is how social media reacted to it. A mention spike at 10:50 EDT was significantly driven by VR announcements. The revelation that Fallout will be available to play on the HTC Vive in 2017 earned it an extra mention spike after the segment dedicated to the game at around 10:30. DOOM will also be playable using virtual reality, getting it a slightly larger mention spike than Fallout around the time of the announcement.

It was around this time that comments surrounding one woman’s screaming reaction to Elder Scrolls Online were reaching their peak.

I join everybody else on Twitter in acknowledging that one woman screaming for Elder Scrolls Online like it’s the new Beatles. #E32016#BE3

That lady really loves her some Elder Scrolls. #E32016 #Bethesda

Blink-182 also got a fairly random segment around this point which contributed to the mention boost.

Bethesda announced that Skyrim will be remastered, getting huge attention, and introduced a trailer for “Prey” which got the second largest mention spike of the conference. 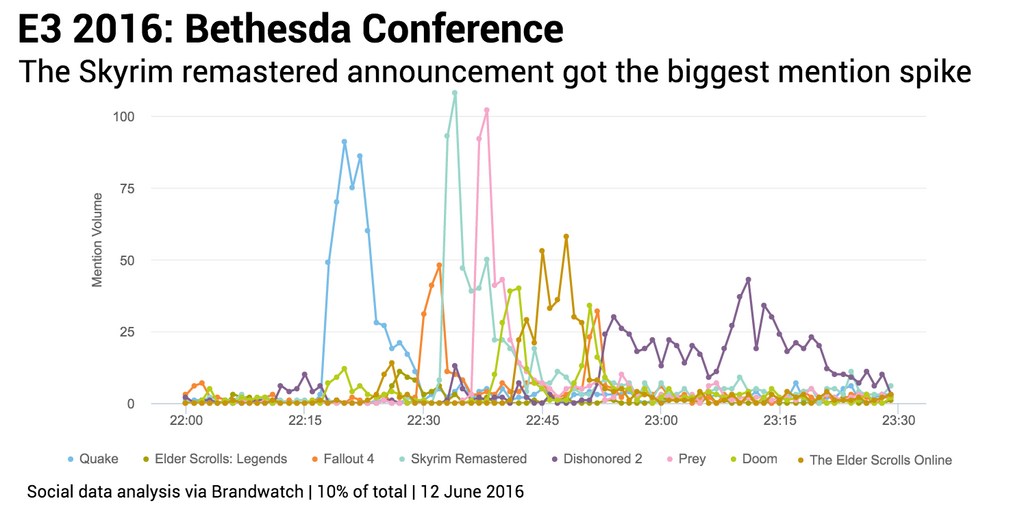 An impressive looking Dishonored 2 was given the most air time, hence the sustained mentions throughout the latter part of the conference. It will be released on November 11th this year and it’s unsurprising to see the game got the most mentions overall. Here’s what the overall conversation looked like while the conference happened: 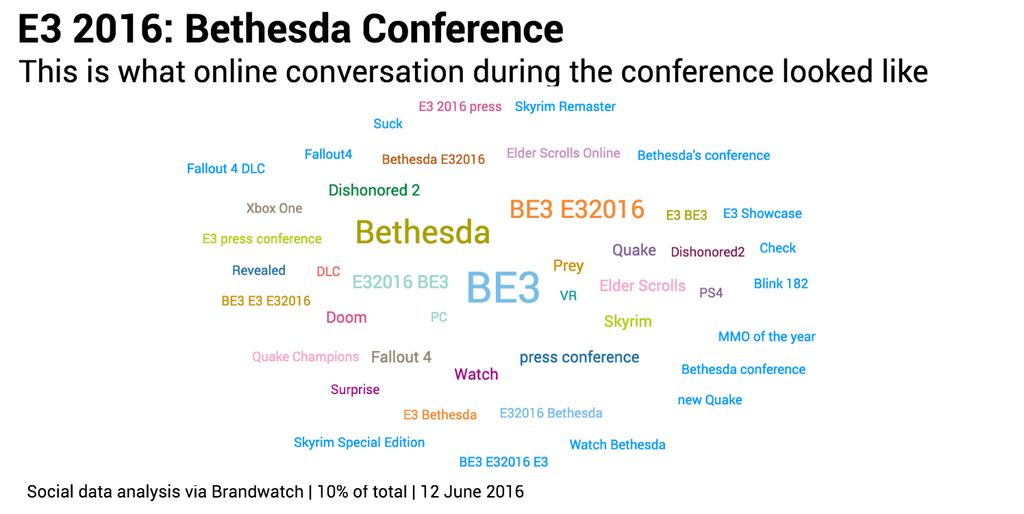 Here are the top mentioned moments on social media during the conference which saw mentions registering at 2.5k per minute. The initial Xbox One S announcement caused a huge spike just minutes into the conference – there was no hanging about.

Dead Rising 4 and indie game We Happy Few took the top mention spikes, something we’re sure Compulsion Games will be thrilled with. The number of games mentioned during the hour-and-a-half conference was incredible, and it made share of voice incredibly tight. Overall it was Forza Horizon 3 that took the most mentions, with Gears of War 4, Dead Rising 4 and We Happy Few just behind.

Including a dance routine involving a human giraffe and a behind the scenes look at the upcoming Assassin’s Creed movie starring Michael Fassbender, the Ubisoft Conference was a lot of fun, and it got a whole lot of people talking on social. Not all mentions were positive. Notable in The Division spike were the number of people claiming it was boring.

No Aisha, we're falling asleep at our computers because you just said The Division. #E32016 #UbiE3

Overall The Division got one of the lowest mention spikes as a game and the majority of the conversation was dedicated to the bigger releases like For Honor, Ghost Recon, Watchdogs 2 and the new South Park game. 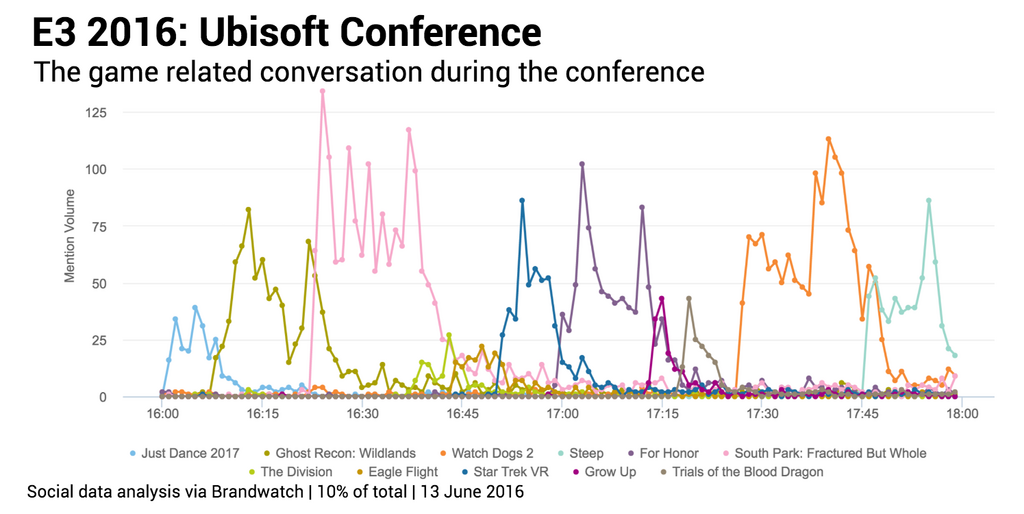 The lengthy South Park segment caught a lot of people’s attention and it ended up the top mentioned game of the Ubisoft conference. 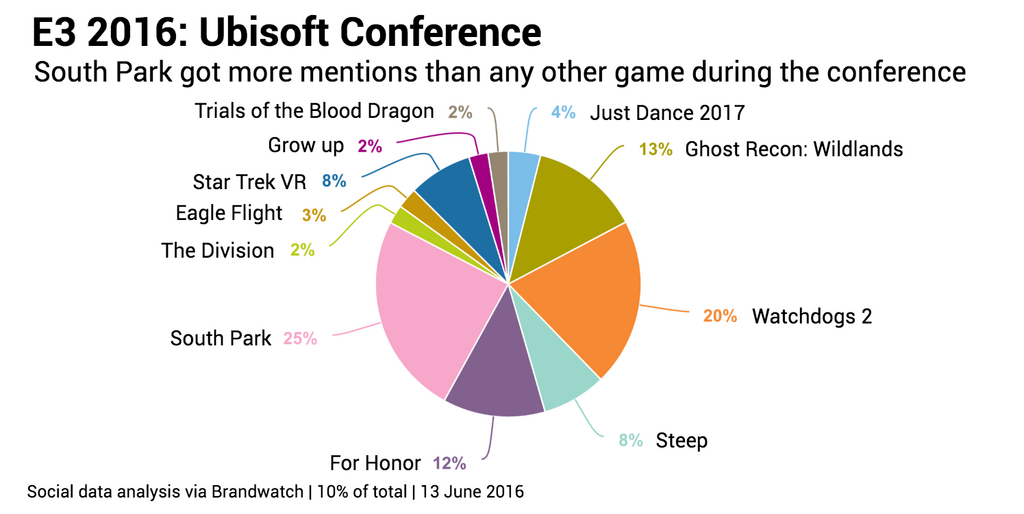 Watchdogs 2 came in second and new title Steep made a decent mark on the conversation with a beautiful demo snuck in at the end of the conference.

Overall we found 102k mentions of the Sony conference throughout it’s run time.

The show, that featured a live orchestra, gained Sony some enormous mention spikes, the largest of which came towards the close of the conference with many commenters claiming they had “won” E3. The live orchestra and appearance of Hideo Kojima on stage were notable non-game related spikes.

Meanwhile, on the game front there were some seismic surges in mentions surrounding new releases and remastered games with The Last Guardian and remastered Crash Bandicoot gaining over 2k mentions in a single minute. 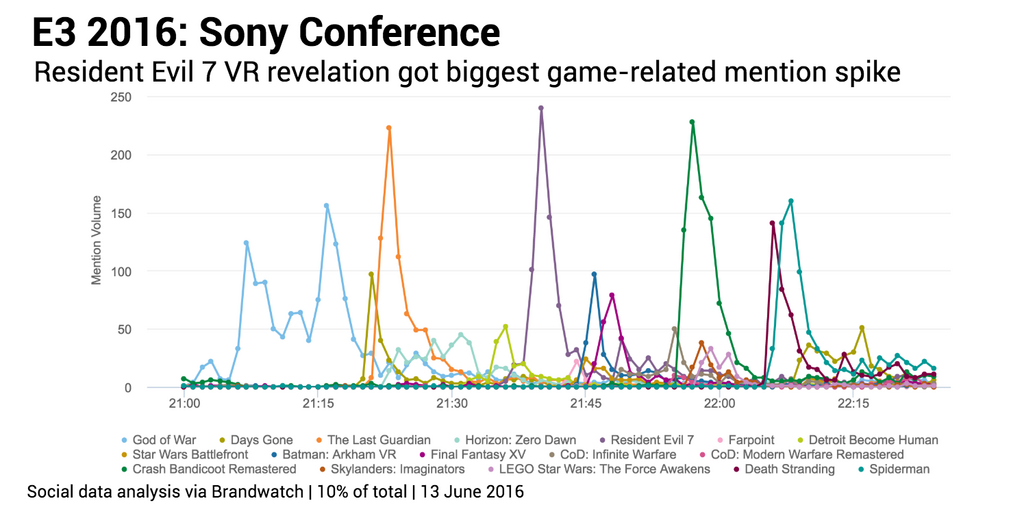 The surprise revelation that Resident Evil 7 will be available on VR earned the biggest game related spike. It kicked off a number of Sony VR announcements including Farpoint, Star Wars: Battlefront, Batman: Arkham VR and Final Fantasy XV.

It was VR games that got the most mentions, with God of War claiming 18% of the conversation and Crash Bandicoot coming in second. Kicking off at 12pm EDT on Tuesday Nintendo’s Treehouse live stream almost solely focused on Legend of Zelda: Breath of the Wild.

That didn’t deter commenters from getting involved, though. As the stream began Nintendo got 20k mentions in an hour. Mentions trailed off towards the end, but we counted 73.3k mentions of Nintendo throughout the day.

Games wise, Nintendo fans were treated to a look at Pokémon Sun and Moon ahead of the lengthy Legend of Zelda segment. We found 5.8k mentions of the upcoming Pokémon title throughout the day, though they were dwarfed by the 75k Zelda mentions. Legend of Zelda: Breath of the Wild became the top mentioned game on social during E3. Comparing days one and two, the first was definitely more exciting on social. Even though a whole lot more games were discussed on the second day, Legend of Zelda has dwarfed their mention volumes. Are you a journalist looking to cover our data? Email [email protected] for more details