Flat Earthers: Social Data on The Wildest Conspiracy Theory Yet

The flat earth conspiracy: the Brandwatch React team takes a look at the data behind people identifying as 'flat earthers' online.

Today in Conspiracy Theory Corner (not a thing) I’m here to talk to you about ‘Flat Earthers.’

When I was growing up I believed anything and everything my parents told me. They told me that if you stuck your finger inside your belly button, your butt would fall off.

My dad told me a number of wild and gregarious stories about aliens, about the moon landings actually being staged inside an aircraft hangar somewhere in the Midwest, and educated me on the various theories on the assassination of JFK. Last year, in return, I got to teach him about chemtrails. I’ve never been so proud.

One thing my parents never told me, though, was that the Earth is actually flat. That’s right!

Not, in fact, the globe you’ve come to know as the good and correct shape of the Earth, but flat. Like a pancake. 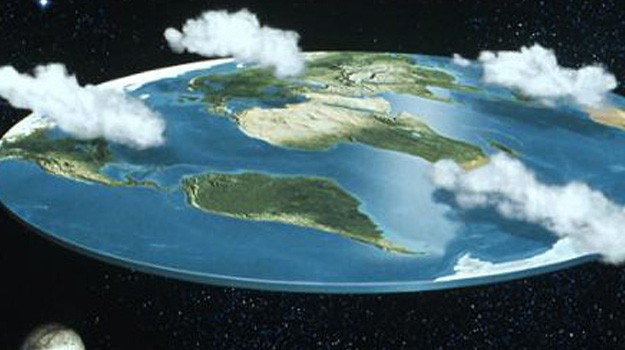 This is one of the latest conspiracy theories blowing up the internet, and due to my upbringing, I’m naturally drawn to such bold claims.

Before jumping into data around Flat Earthers, it’s worth quickly explaining what the Flat Earth movement actually is. Here’s how the Daily Mail summarized it:

And here’s how basketball star Shaquille O’Neal summarized it:

In school, first thing they teach us is, ‘Oh, Columbus discovered America,’ but when he got there, there were some fair-skinned people with the long hair smoking on the peace pipes. So, what does that tell you?

Columbus didn’t discover America. So, listen, I drive from coast to coast, and this s*** is flat to me. I’m just saying. I drive from Florida to California all the time, and it’s flat to me. I do not go up and down at a 360-degree angle, and all that stuff about gravity, have you looked outside Atlanta lately and seen all these buildings? You mean to tell me that China is under us? China is under us? It’s not. The world is flat.

Flat Earth vs Round Earth: It’s a thing

Is everything we’ve every been taught about the world on which we live an out-and-out deception? Is the apparent curvature of the Earth merely an optical illusion? Is there something in what Shaq’s saying?

Luckily I have access to millions of conversations online (through Brandwatch Analytics), so I decided to explore what people are discussing online about the earth being flat, versus being round.

Before getting stuck into the data, I thought I’d ask my team what they thought. 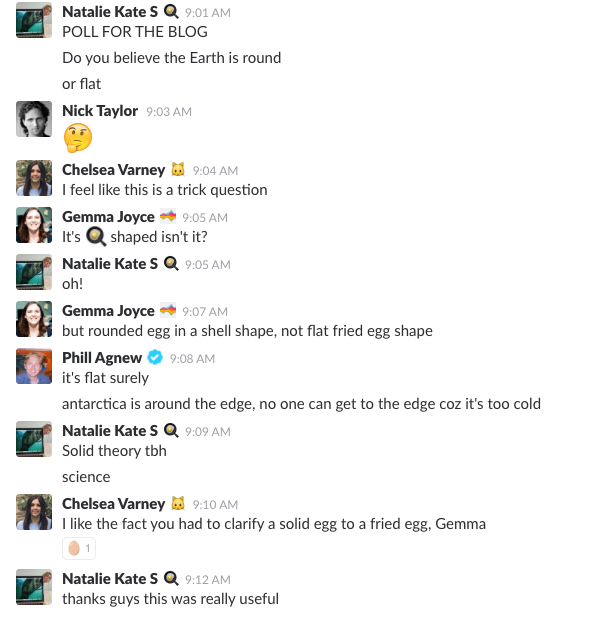 To broaden the scope beyond five marketers, I set a date range of two months for the query looking for people talking about the Earth being flat on social media, and using Audiences looked for people self-identifying as a ‘Flat Earther.’

Here’s what I found.

If you identify as a Flat Earther in your Twitter bio, you’re much more likely to be male than female. 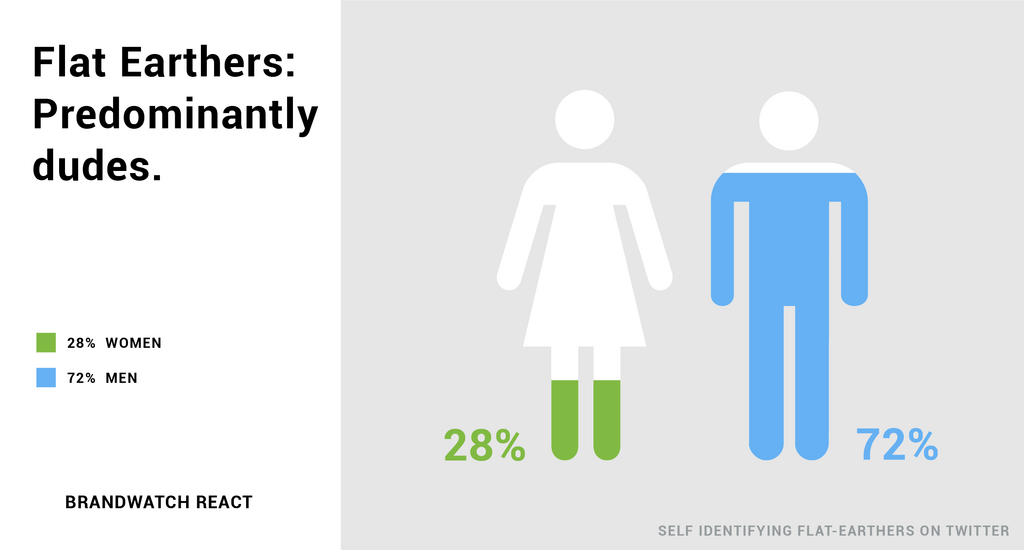 As you can see below in the graph taken from Audiences, people identifying as Flat Earthers online are mainly based in the US or the UK, with Canada in third place.

The grey line shows the Twitter average, so you can see whether this audience is over- or under-indexing in comparison to the average.

Perhaps surprisingly, 15% of people who identify as Flat Earthers on Twitter are categorized as a ‘Scientist or Researcher’ – massively over-indexing on the Twitter average.

4% identify as a teacher or lecturer.

A bio keyword cloud shows that Flat Earthers also have a strong link to religion – and they’re proud of their views. 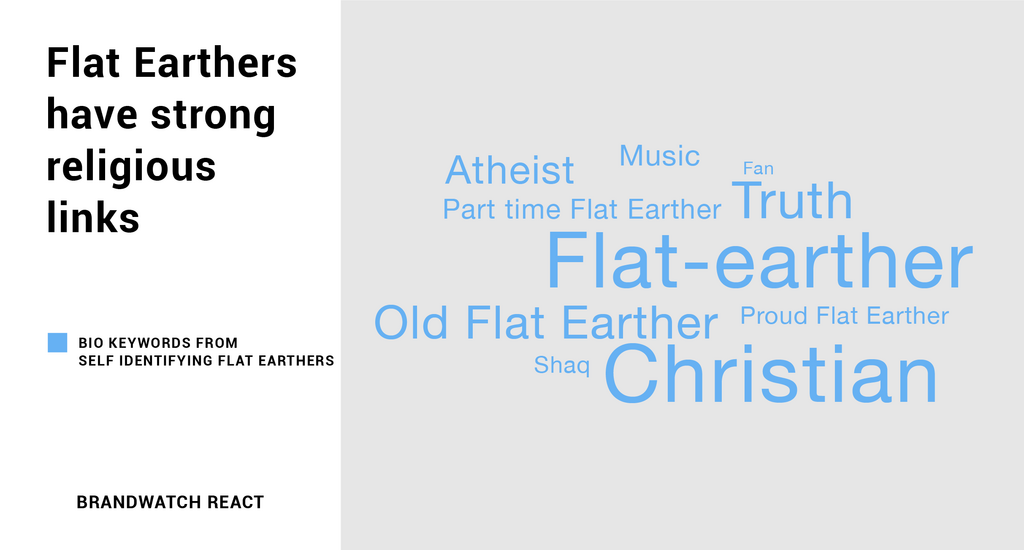 Or does it? Are magicians peddling a secret Flat Earth agenda?

Part of the fun of playing with social data is being able to go deep into the mentions and find ‘interesting’ posts on any given subject.

Here were some of my favourites.

Yeah I'm a flat earther. I strongly believe that the earth should be flattened by a gigantic meteor as penance for the atrocities of man.

I'm a Flat Earther. I believe the planet is like a big pizza with moutain toppings and ocean sauce.

Creig has a point, to be honest.

Flat Earthers are everywhere. Sometimes they’re even ‘verified’ on Twitter.

The cities in the background are approx. 16miles apart… where is the curve ? please explain this pic.twitter.com/YCJVBdOWX7 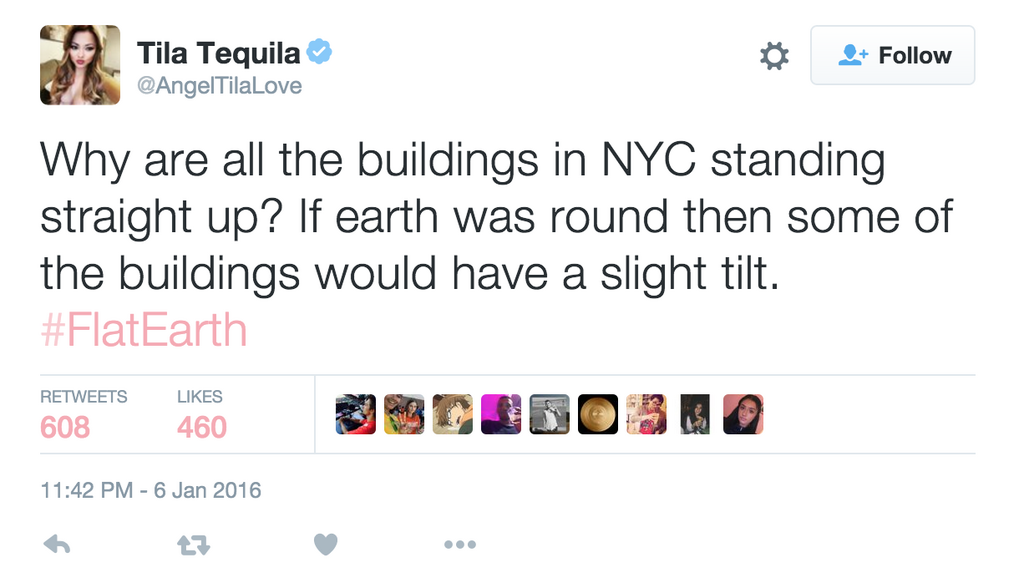