React: Data on The Incredibly Mixed Response to the New Ghostbusters Movie

The new Ghostbusters hit movie theatres across the world this weekend, causing a huge wave on social.

Opening to mixed reviews, tweeters rushed online to make their opinions of the film known.

We decided to take a look at the data behind the enormous response to the film that had such a bumpy ride on its way to the big screen.

A slimy splash on social

Friday, the day the film was released in the US and UK, saw over 60k tweets (excluding retweets), while we tracked 300k back to the 1st of July. 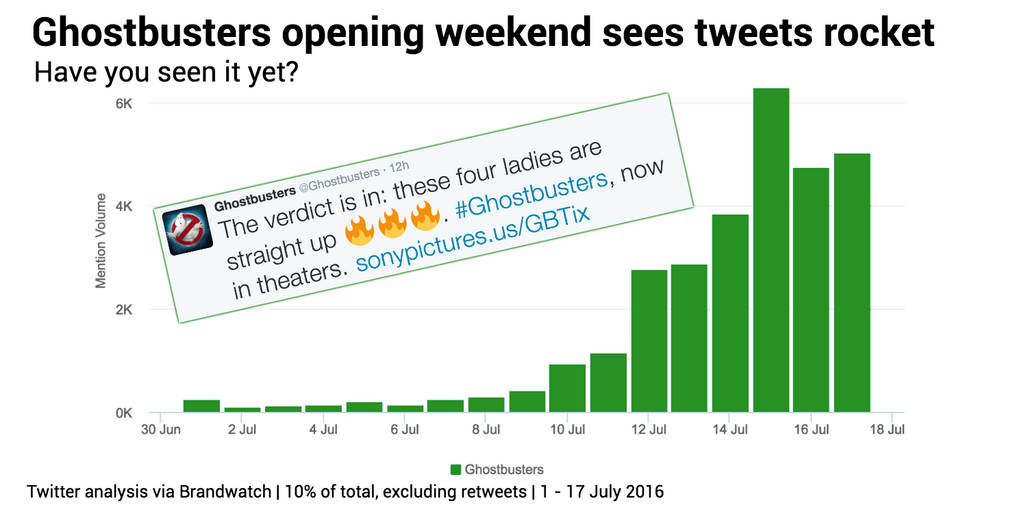 We also took a look at the top mentioned words being used alongside “Ghostbusters” on Twitter, revealing some interesting highlights. 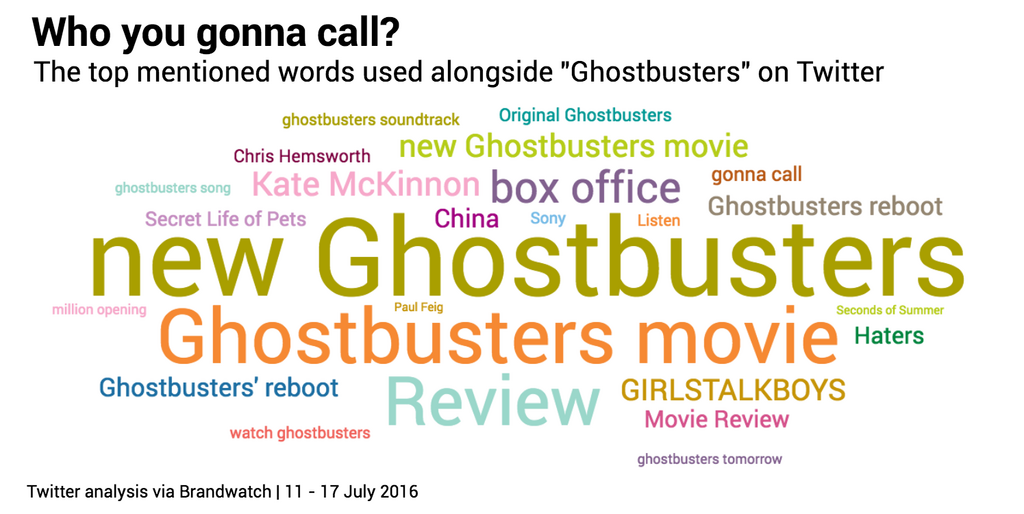 There’s an incredible amount of love for Kate McKinnon who plays one of the four leading ladies, while there were a lot of tweets celebrating the inclusion of the 5 Seconds of Summer song “Girls Talk Boys”.

The Secret Life of Pets, a new animated film, got a significant amount of mentions as it reportedly took over Ghostbusters at the US box office over the weekend.

“Haters” also had a sizeable chunk of the conversation, but we’ll get back to that later.

It’s been a difficult ride for Ghostbusters, with plenty of criticism surrounding the remake starring four women.

The film suffered what one Guardian writer called “a stream of sexist bile more foul than the slimy green ectoplasm spewed up by an angry demon” and even Donald Trump condemned the film for having four female leads, exclaiming “What’s going on?!”

There was no shortage of hate on Twitter before the film was even released. So-called “Ghostbros” claimed that their childhoods would be ruined by the new film.

Childhood ruining became a point of ridicule for many defiant tweeters, many of whom referred to going to see the movie as “going to have my childhood ruined”.

At the cinema waiting to go in to watch #Ghostbusters, joined by young ladies and kids! No one’s childhood seems ruined so far…

Not everyone who enjoyed the original Ghostbusters were worried about the new version, however.

The  original cast members making cameos in the new movie and the number of references to previous films were definitely crowd pleasers.

There may be big differences with the original franchise but there are plenty of people celebrating the fact that the film has stuck to the spirit of the older movies.

Aside from the genuine “ruined my childhood” responses, critics have been fairly split in their opinions.

Rotten Tomatoes gives the film a fairly favorable rating, while IMDB says the movie has a weighted average of 5.1/10 according to it’s users.

average IMDb ratings for the new Ghostbusters movie. Seems like men hated it and women liked it. interesting pic.twitter.com/nPe17tuyqE

Some claim they expected more laughs from director Paul Feig (whose previous work includes Bridesmaids and The Heat), though we found over 3k mentions of “laugh” and “laughter” amongst tweets about the film.

Have you seen the new movie yet?

Are you a journalist looking to cover our data? We have plenty more to share. Email [email protected] for more info