Nike’s Colin Kaepernick Just Do It Ad: Will the Backlash Do Any Damage To the Brand?

Kellan Terry has been providing data to the press around the Colin Kaepernick Just Do It ad all week. What's his take on the backlash and whether it'll have a negative effect on Nike's bottom line?

Nike’s been in the news and now you’re curious what the social data says. You’ve come to the right place.

Perhaps you’ve seen our data in The Wall Street Journal, Business Insider or Digiday quantifying the reaction to Nike naming Colin Kaepernick as the star of their 30th annual Just Do It campaign. But now that we’re out of the height of the storm, it’s possible to take a more holistic view of the social media backlash. Yes, backlash – we’ll get to that.

Since I’m (apparently) the resident expert on all things Nike, I’m happy to once again be your driver on a data-driven journey on the Brandwatch blog.

Brands have been tip-toeing on social media ever since November 8, 2016. This is strictly a matter of fact, and if you disagree: you’re wrong.

There have been plenty of examples where brands have attempted to weigh in on social and political issues from all sorts of stances, only to be met with people screaming for boycotts online. Observing these branding blunders for nearly two years has shown Nike exactly what to expect. Knowing the potential repercussions, Nike chose to proceed with their ad and picked Kaepernick as its protagonist.

In case you’ve been under a rock, here’s the ad itself:

The reaction was predictable from a social data perspective. We’ve seen it before.

Mentions of Nike on the social web took off. When you factor in that Monday was Labor Day in the US, you’ll see why the reaction reached its peak on Tuesday, September 4 as online mentions of Nike ballooned to nearly 2 million in one day. 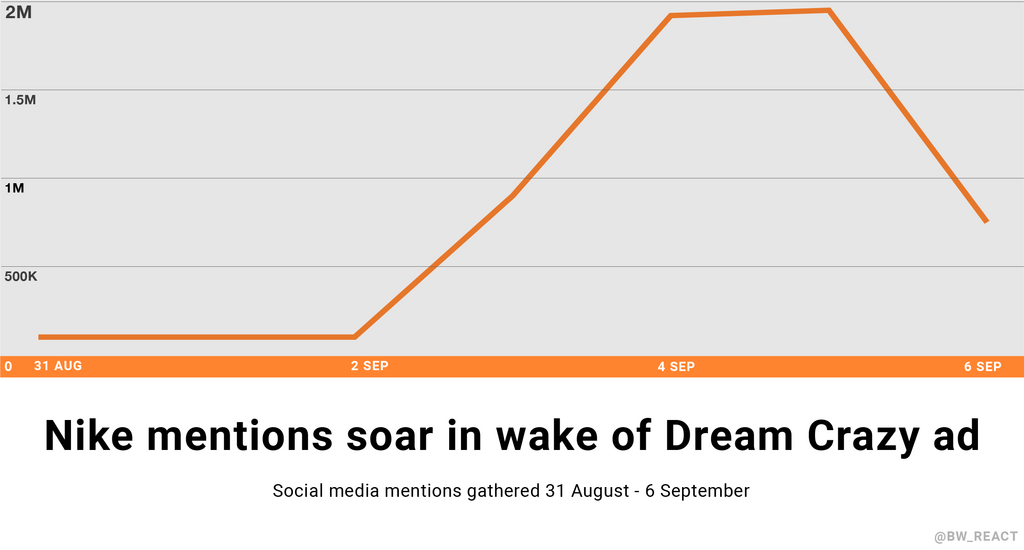 Mentions of the campaign slogan “Just Do It” exploded by more than 3,460% from September 2-4, accumulating more than 400,000 online mentions on September 4 alone.

A rarity in the occurrence of a social media outcry is sustained mention volumes over the course of more than one day – we’re safe to call this one big case of outrage.

I say “outrage” purposefully, as Nike’s social conversation sentiment dramatically turned negative in the days after their Colin Kaepernick announcement. Previously, for every day leading up to the announcement, Nike enjoyed a social conversation that was incredibly positive. There was no single day in the recent past that saw sentiment-categorized mentions dip below 90% positive. 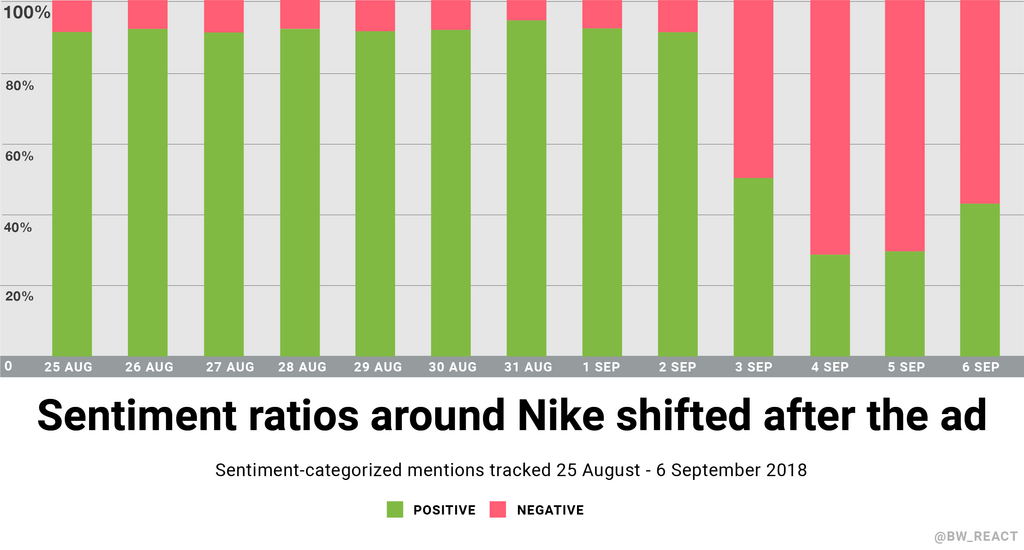 On its most negative day, September 4, Nike’s social conversation was only 28.5% positive within sentiment-categorized mentions.

Overall, when we look at Nike’s conversation from the past week (as of the time of writing on September 6) we find that Nike’s entire social conversation is 65% negative among all sentiment-categorized mentions. You’ll notice below that “Just Do It” mentions are far more positive than general “Nike” mentions – a sign of the polarity within this conversation). 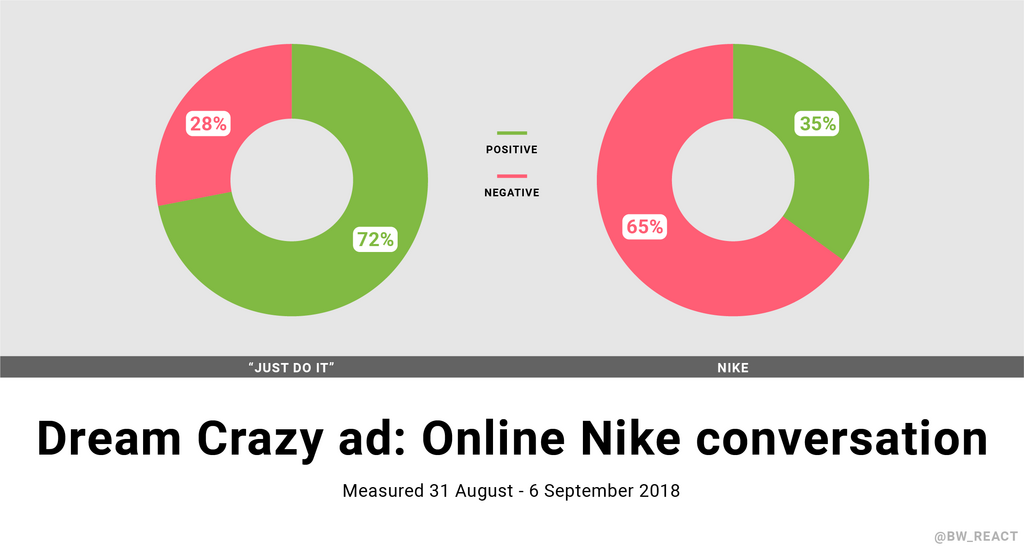 It’d be wrong to ignore the fact that some of those negative mentions are the result of taunting and sarcasm – this is the internet after all, dear reader.

Some negative mentions were of course produced as social users took amusement in seeing people burn, destroy and otherwise mutilate their Nike shoes and apparel.

The single most-used emoji within Nike conversation in the last seven days is the “crying laughing” one, and this simple smiley face with tears in its eyes shows just how much people are mocking each other.

The duality of this social conversation can’t be seen any more clearly than in the most-used hashtags.

#NikeBoycott and #BoycottNike have more than 462 million and 710 million impressions respectively, but we also see hashtags that rally support for Nike. #TakeAKnee, a hashtag supporting Kaepernick’s cause that circulated during last year’s NFL season, has accumulated more than 136 million impressions.

Should we be worried for Nike?

So…here we are. Surely a grim prognosis for Nike, right?

We have a momentous amount of social data proving that, despite Nike’s usually very positive reputation, they do have the power to piss a lot of people off.

But remember, Nike’s had almost two years of witnessing and analyzing this landscape.

I couldn’t have said it better myself, Chris.

I’ve watched and analyzed the social data around many, many brand backlash incidents and none of those brands have shuttered their doors. Nike is going to be just fine.