Is Starbucks spelling your name wrong on purpose? The React team delves into the data to find out how the apparent error works in favor of the coffee giant.

Everyone’s done it. Well, at least lots of people have, given 70 million customers visit Starbucks each week.

You’ve gone to Starbucks, given the barista your order and name, waited patiently for your drink and then received a surprise at the counter. “That’s not how you spell my name!”

The entitled monster inside you might be tempted to complain. You decide not to be that monster.

Instead, like thousands of others, you take your seat by the window, position your sunglasses so the sun glints magically just below the Ray Ban sticker and snap the obligatory Starbucks cup shot, captioning it “Lol why can’t @Starbucks ever spell my name right”. Cue a couple of consolatory likes. Then move on with your deadpan scroll through other people’s lives.

The Brandwatch React team, who are feeling a little existential before their morning coffee today, decided to take a look at this phenomenon.

How much free advertising has Starbucks got from the incorrect (and correct) spelling of their baristas?

This article has been written many times, of course, but not in any quantitative sense so far as we can tell.

We used the newly launched Brandwatch Image Insights to find people posting pictures of their Starbucks cups on Twitter, and searched within those mentions for people specifically referencing the spelling of their name in the caption. Then we looked at tweets without logo detection (these include people chatting about Starbucks spelling their name wrong, or right, without necessarily including an image, or including an image where the logo isn’t visible).

This is what we found.

Looking at US and UK mentions between 1st June – 18 July 2017 (excluding retweets), we found around 50 tweets per day including a reference to the spelling of a name and a mention of Starbucks either in the text or as a logo in an image. Overall there were 2,814 mentions – many of them were posted by women. 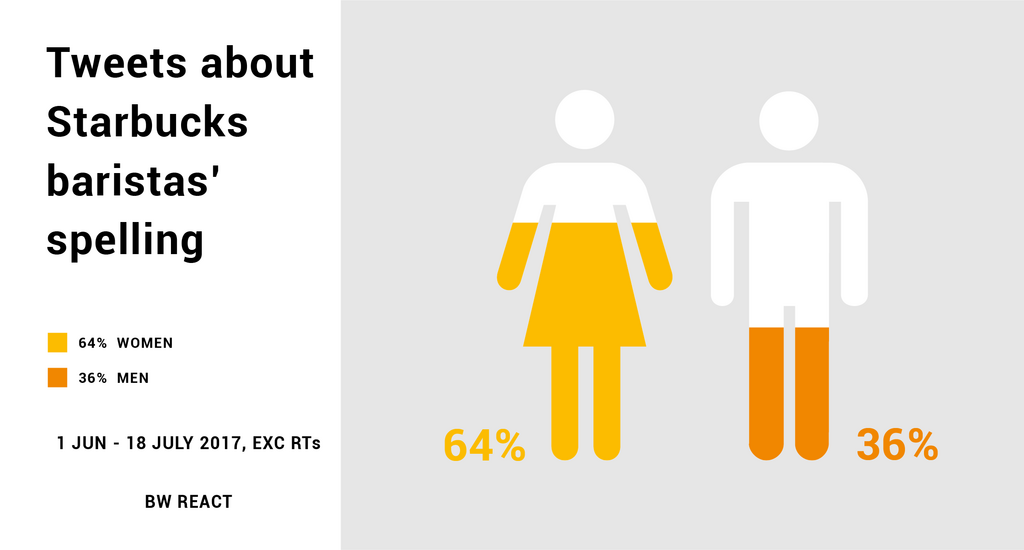 Now 2,800 mentions might not seem like a huge amount, but consider that Starbucks has been putting names on cups since March 2012.

We can fairly safely assume that’s an extra 75,000 mentions (and this is on Twitter alone, without RTs) that have hit the timelines of thousands, if not millions, of people with Starbucks’ name or logo front and center.

Misspelt names, while not exactly positive, aren’t really going to offend anyone, so that fact that people are inclined to share images of their orders when this occurs means Starbucks’ earned mentions on social are getting a decent boost.

As we’ll find, misspelt name mentions are actually getting Starbucks better quality exposure on social than in their average Twitter conversation.

Of course, not all mentions are created equally.

Some mentions are tastier than others

i just want my name to be spelled right when i order things ? pic.twitter.com/3XZFhkzYB9

Pictures tell a thousand words. Pictures capture the eye much easier than text does. Pictures also get way more engagement.

On top of that, Starbucks is also in a place where their logo is so recognizable that they don’t even need to include the words “Starbucks Coffee” in it. The ‘Starbucks siren’ is arguably as iconic as the Playboy bunny or the Apple apple.

A photo of the logo, then, is surely worth more when it comes to getting your brand in front of people than a droney comment that’s a lot easier to scroll past.

What else is good in a mention? An @ mention isn’t a bad place to look next – they’re easy to track, they provide a link back to the owned channel which could result in an extra follow or two. It’s not as good as a photo, but it’s still pretty good.

And failing an @ mention, a brand mention is a good third place. Still has the brand recognition, just without the visual/linky goodness.

So here’s a little hierarchy – although note that we’re talking about neutral or positive mentions here (not a photo of a half eaten brownie with a hair hanging out of it). A misspelt name probably isn’t going to put off current or future customers.

We took a look at the Starbucks mentions that included name spelling as part of the caption.

We also used Brandwatch Image Insights to identify instances where people shared an image which included the Starbucks logo (but not necessarily the brand name) as well as searching for mentions of spelling names that included “pic.twitter” – many of the photos shared didn’t include the Starbucks logo because it was obscured by a hand or was on the other side of the cup.

Here’s the breakdown of mentions that tweets about names on Starbucks cups get. Click on the engagement types to find examples of each. 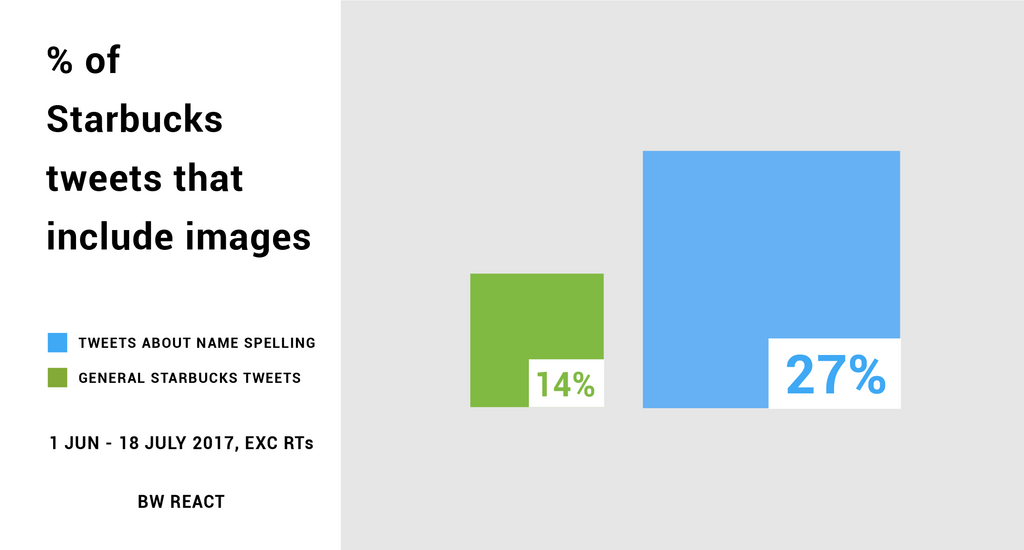 And on top of that

We found a whole bunch of verified authors with thousands of followers getting involved in the conversation, too.

Starbucks! This isn't how you spell my fucking name! ITS T.R.E!! Fuck! Every time. I'm going to back Coffee Bean ? pic.twitter.com/Ef3Eu7bMfn

It's finally happened! @Starbucks got my name wrong! ??? pic.twitter.com/BArrm2Vu84

Starbucks baristas never misspell my name. Life is so good. I feel good. The future is bright.

To summarise that analysis, if we are to accept that people sharing images (especially with a brand name or @ mention) is the most valuable form of “free advertising” for Starbucks on social, the whole name spelling trend is working harder than the general conversation to generate it.

The % of people sharing images in the name spelling data is almost double that of the general conversation – and we can be a lot more confident that these pictures are of full, frothy frappuccinos than unimpressive brownies.

The fact that Starbucks spelling your name wrong has become a meme in itself is no loss for the coffee giant.

If this is all a scheme by Starbucks to get free advertising on social media, it’s a very good one indeed.

Go beyond text and start seeing your brand through your customers' eyes.. 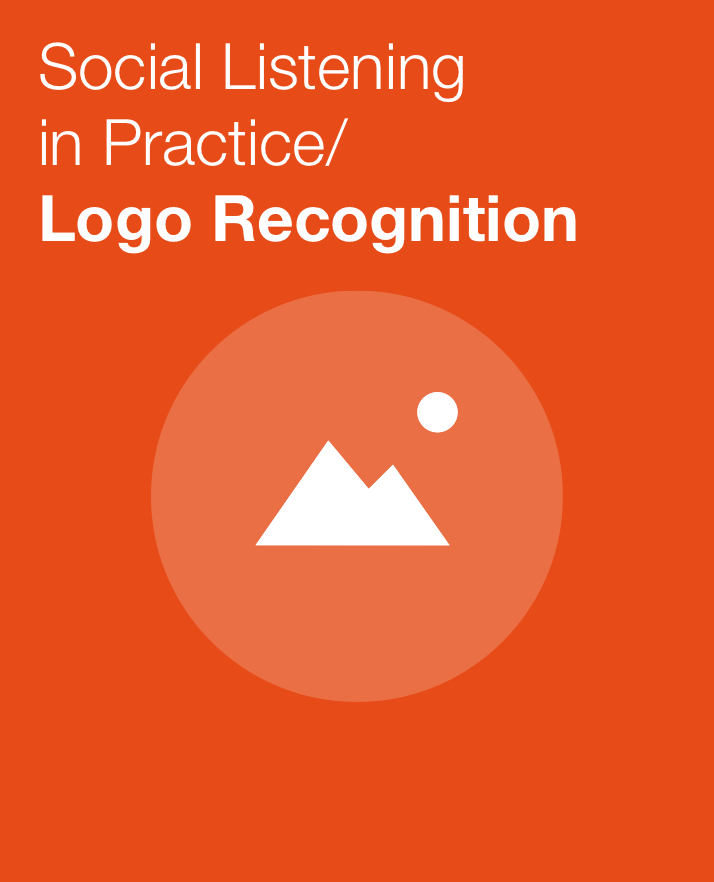