The brand that "won" Super Bowl LVI surprised everyone.

Super Bowl LVI was full of surprises, from the Rams' late drive to victory to the unexpected upside-down appearance of 50 Cent as an additional headliner during the halftime show.

The surprises continue when looking at the social media data around the event, from the top-mentioned ads to the celebrities driving the conversation.

Read on to discover the biggest names that surfaced across Twitter conversations and the ad that "won" the Super Bowl LVI hype war.

Note on methodology: All the data mentioned here was gathered from public Twitter posts between 6:30pm EST to 10:15pm EST on 13 February 2022 – roughly the time frame of Super Bowl LVI.

It is normal to have one brand that stands above the rest when it comes to conversation mention volume during the Super Bowl, and that brand is typically the one that sponsors the halftime show. However, this is not a typical year.

The one brand running an ad during the 2022 Super Bowl that was mentioned more than any other was Coinbase, with more than 79,000 mentions during the game.

The simple ad, which is literally a floating QR code that's reminiscent of an old screensaver, beat out all the competition to secure the most mentions. If we were to take all 560,000 tweets around brands running ads and look at them as a whole, Coinbase's mentions accounted for an impressive 14% of them.

The driving factors behind Coinbase’s conversation volume are numerous.

Coinbase was not the only crypto brand that ran an ad during the Super Bowl this year, meaning they've not just beaten out huge and established brands but also their direct competition.

Learn how to research, monitor, and measure ROI on sponsorship opportunities big and small.

Our guide will show you how to research, monitor, and measure ROI on sponsorship opportunities big and small.

The celebrities driving the conversation

One of the most-loved aspects of the ads from each Super Bowl is the star power. This year was no exception (unlike the most mentioned brands above).

There were over 368,000 mentions of the celebrities who were featured in Super Bowl ads during the game. The Queen of them all was Mary J. Blige with more than 108,000 mentions. Of course, Blige had the advantage of being in an ad as well as performing in the halftime show. 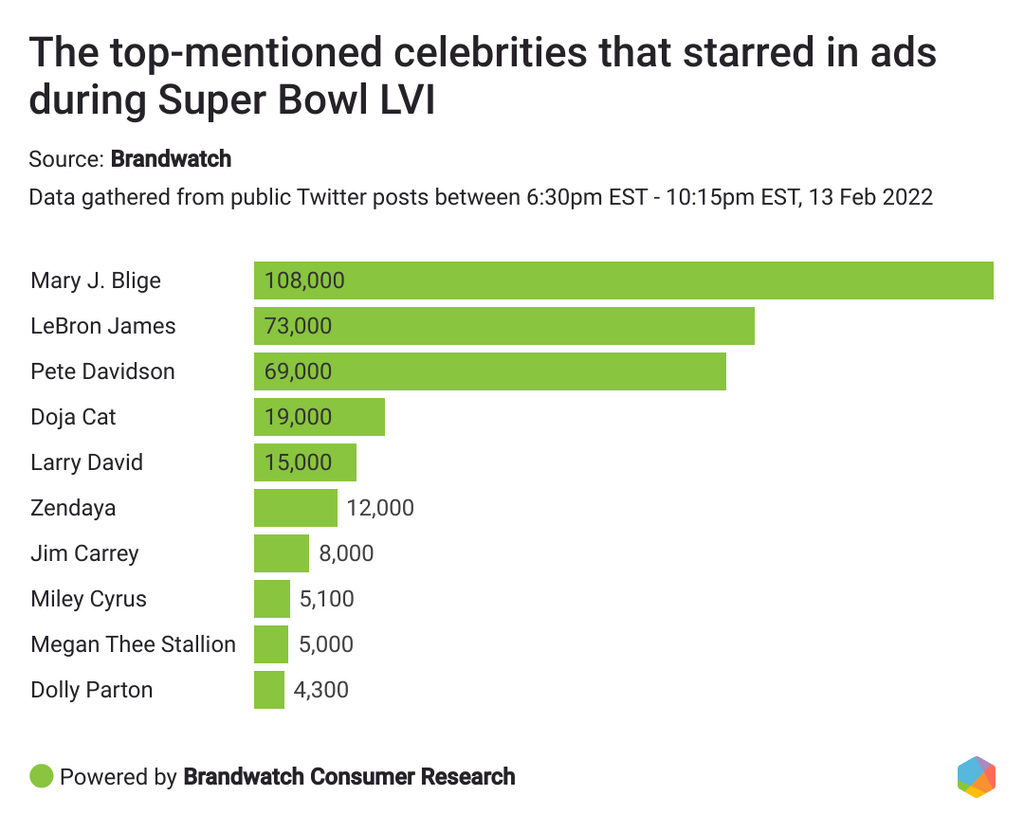 Mary J. Blige and LeBron James tweets made up nearly 50% of all celebrity mentions (Blige 29% and James 20%). While Blige had the advantage of performing during the halftime show, James was able to command his own conversation on Twitter as he was at the game and tweeting (even weighing-in on the halftime show itself).

This year’s batch of Super Bowl ads also saw the return of some beloved characters as the likes of Jim Carrey and Mike Myers reprised two of their best-known roles. Carrey’s “Cable Guy” was mentioned more than 6,700 times during the game, and Myers’ “Dr. Evil” received over 3,700 mentions of his own, but when it came to the most discussed characters, “The Sopranos” were the most discussed with over 28,000 mentions during the game.

The power of nostalgia and other learnings for brands

Captivated by the ads and sponsors at Super Bowl LVI?

Our guide will show you how to research, monitor, and measure ROI on sponsorship opportunities big and small..