The Brandwatch React team explore data around complaints and questions sent to traditional bank's support Twitter handles to find the themes and common problems that disruptors could move to address.

Disruption is, of course, an overused term, but there’s no getting away from it regardless of what industry you’re in.

The world is moving quickly and the slow moving behemoths that once dominated particular fields have suddenly found themselves competing with far more dynamic entities.

The financial industry is no different. While enormous banks that rely on reputation may still be prospering, fast moving challenger banks are able to address the quickly changing wants and needs of consumers in ways their established competitors simply aren’t built to do.

The Brandwatch React team has been interested in this trend for a while, observing the rise to popularity of Monzo in the UK and then turning our attention to the US. We took a look at six of the biggest consumer banks in the US and the mentions of their customer support handles on Twitter, to see what kinds of complaints where being levelled at the giants that disruptor banks could move to address.

Our latest Social Outlook report showed that people are particularly willing to air their negative thoughts around financial services companies on social media, so we imagined there’d be plenty to pick up on.

To identify these issues, we scrolled through mentions and used Brandwatch Analytics’ topic cloud component to surface common themes.

While there were six key issues that we found, there’s one central theme: convenience. Here are the most prominent issues we found in the data.

Getting charged for things that people didn’t want to be charged for was highest on the list.

Unexpected fees were prominent, as were foreign transaction fees. That said, lots of the mentions were simply questions about fees.

Making sure customers are clear about fees and, where possible, scrapping them, could get rid of large chunks of these queries and complaints and the distrust they can encourage.

Comments about the banks’ customer service came next.

Customers did not hold back if they felt the banks’ customer service wasn’t up to scratch. A number of people called the banks rude, while others were calling out how long they’d been waiting for a reply or on hold for.

Banks can target this by offering round-the-clock, easily accessible and well resourced customer help that gets people to answers quickly.

Faraway or faulty ATM as well as charges from them were common themes in this topic.

Physically getting to an ATM can be an issue not only for people who aren’t as mobile as others but also for those who expect instant results – a theme that we’ll explore later on. Placing a physical barrier between a customer and the service they need is not going to make people happy when they’ve become accustomed to immediacy from other products they use.

When you get to an ATM and it isn’t working it can feel even worse. Here’s an excerpt from a Brandwatch Case Study where Sparkassen-Finanzportal Gmbh dealt speedily with one that had broken by paying attention to the social data:

The Sparkassen-Finanzportal Gmbh monitoring team noticed a sudden spike in conversation surrounding one branch in particular. Using Brandwatch Analytics realtime data and instant email alerts the team were able to identify localized conversation focused on an ATM which had broken. Using their escalation process the monitoring team were able to inform the branch in question and instructed their technical team to deal with the issue promptly. The team at the branch hadn’t identified the ATM was out of action, and it was online conversation that alerted Sparkasse to the issue in real-time.

There are two main themes that we picked out when scrolling through mentions regarding safety, security and data breaches:

People appreciate security, but being checked on every log in is not something that everyone appreciates. We found a number of people who were irritated by the verification steps they had to go through.

If banks can make these steps more convenient without compromising on security (perhaps using face ID or similar) they may win some favor here.

The actual security of funds

It’s clear that people are concerned with data breaches and will reach out on social asking questions about whether things are safe and what will be done. Ensuring that communications are out there and visible at times when concern about security breaches are high is vital to keeping customers calm.

That said, our recent Financial Services report found that people are far more interested in convenience than security. This very much fits with the other issues mentioned in this blog. 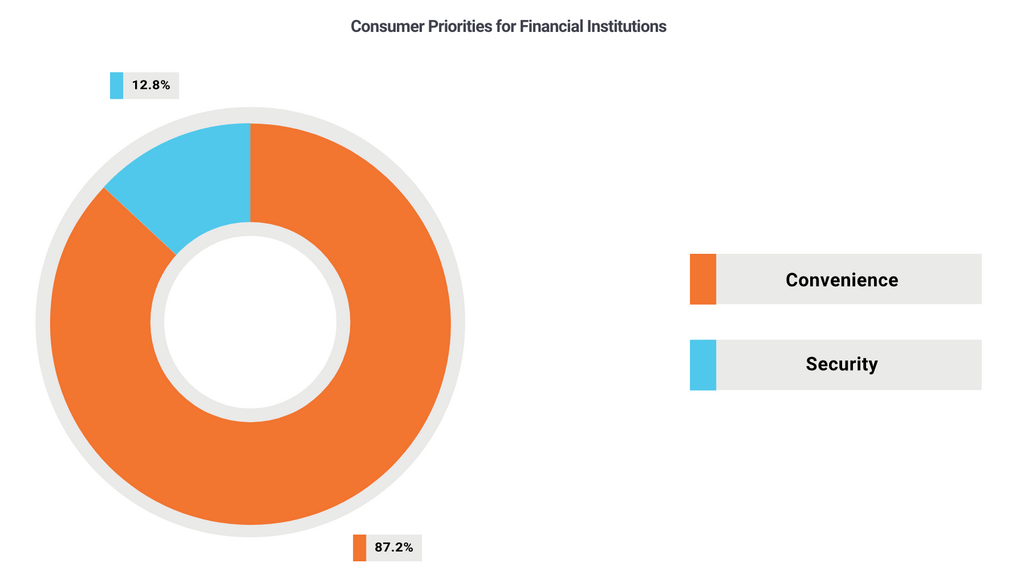 Sometimes people have trouble having their new card shipped to them because they’re travelling or have moved, and again, it’s an issue of physical spaces getting in the way of what consumers need there and then.

People waiting on cards seemed particularly prominent – something that can cause a lot of inconvenience with today’s often cashless transaction focus.

While these can be difficult issues to solve while we’re still paying for things with pieces of plastic that break and expire, banks must do what they can to help those who find themselves without the means to pay for what they need to be able to quell these complaints.

Issues with websites not working and general questions were also one of our issues for banks to be aware of. Ensuring an efficient, easy to use and quick to update online service is another way banks can avoid answering lots of questions and dealing with impatient customers.

In this era of immediacy – particularly one day delivery and instant access to movies and services – big banks are not just being compared to other big banks when it comes to supplying a convenient customer experience. They’re competing with agile start-ups in the financial services industry as well as companies that go way beyond that field that are capable of quick change and fast moving service. These fast movers, both in the way they operate and the way they provide their services, are the ones established banks need to watch out for.