More characters are added to the roster. More films come out every blockbuster season. More millions are generated over each opening weekend.

The fandom around Marvel’s films is understandably strong. With decades of lore to get lost in, you can be hours-deep into a superhero’s backstory without even scratching the surface.

The side-effect of this is a rich bed of online conversation about superheroes, the artists who draw them, and the one writer who’s bringing them to the screen.

If you plotted a tiny percentage of those conversations on a map, it would look something like the image above.

So large is the world of conversation around Marvel, our newest research sets out to answer just one question. What does Twitter think about The Avengers?

Over the past month, we’ve tracked mentions of each superhero that has appeared – or is certain to appear – in an past or future Avengers movie.

As seen above, In any given hour there will at least 500 posts about one of the ten Avengers we’ve tracked.

Picking up on the buzz

In 30 days, every hero gets name-dropped a fair amount.

This month, though, Spiderman (slated to receive his own Marvel film in 2017) has taken the top place.

Thor’s not far behind, followed by Iron man. Predictably, the ‘second tier’ Avengers (Quicksilver, Scarlet Witch) don’t get a lot of attention.

It’s no surprise they don’t feature heavily in marketing materials, or get many of their own action figures.

As for the rest, here are the full numbers:

Using sentiment analysis, we’ve identified which proportion of Tweets are positive, and which are negative.

We’ve discovered that no-one really talks about Quicksilver. However – the proportion of people that come out in favor of him is surprisingly high.

Though he’s beaten in pure volume by his dreamy contemporaries, he nips into fourth place of the most-loved heroes.

It’s nice to know that – in general – the Avengers are more loved than hated.

Over the past month, 13% of all Tweets about them have been positive, whereas only only 1.9% have been negative.

That said, the proportion is much higher for certain characters. Unfortunately, it’s our duty to name them here.

Black Widow received the most amount of hate over the past month.

Hawkeye, too, is sadly regarded as one of the less impressive Avengers – he’s drawn a mountain nay-sayers, too.

Women are from Venus, Men are from an ancient planet rich with primary adamantium

Sorting those 188,120 authors automatically by gender reveals 41% are female and 59% are male – showing an overall majority of men Tweeting about superheroes, but it’s a different story when you look at each character in turn. 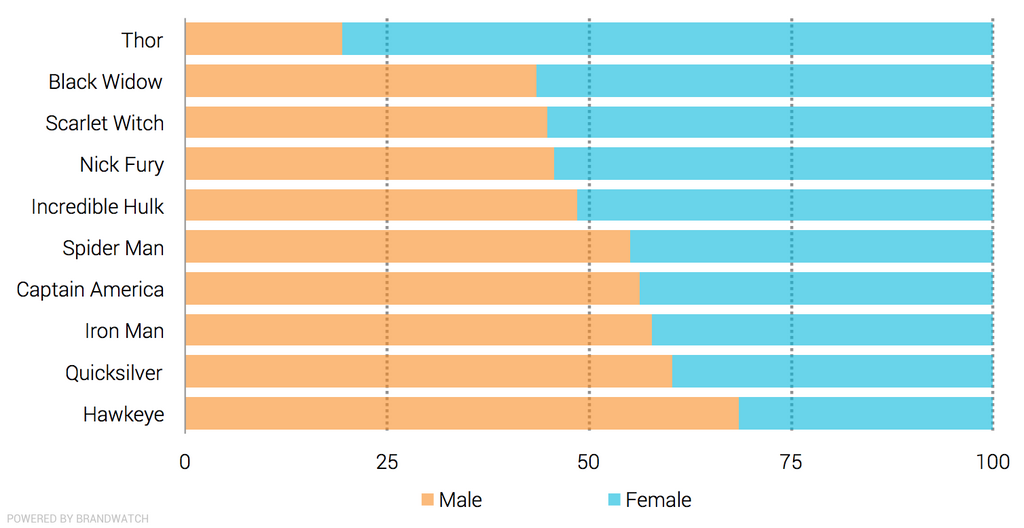 For Thor, Black Widow, Scarlet Witch, Nick Fury and the Hulk, women are leading the majority of the conversation. Thor – played by actor Chris Hemsworth – has a huge female fanbase, with women making up 80.6% of the authorship.

Men, however, are more likely to talk about Iron Man, Quicksilver, Spiderman and Captain America.

Remember those people bullying Hawkeye? – 68.6% of them are guys.

By learning about who’s talked about and who’s not, we can answer more business and culture-centric questions.

Is Marvel’s marketing spend on the upcoming solo films being put to good use? Is it worth striving to make Hawkeye cool when everyone clearly thinks he’s terrible? Should the advertising department really be targeting 16 – 35 year old males as heavily as they do?

Coupled with what we’ve learned from the recent Suicide Squad trailer leak, we’re getting a rich social picture of how people enthuse about comic book movies.

But, how will this change next month? Let’s wait to see how Ant-Man does.