When Do People Want Pizza? Social Data Has The Answers

Pizza is the best thing in the world. It is in constant demand. But when do people want pizza most? The Brandwatch React team used social data to find out.

Pizza is the best thing in the world. It is in constant demand.

But when is it in most demand? But when do people want pizza most?

The Brandwatch React team loves to ask the big questions, and this Friday we were hungry for data. And pizza.

When do people want pizza?

Finding pizza lovers is easy as pie. But working out when people want pizza most requires a little more sophistication.

We searched for people tweeting about ordering, wanting, needing, wishing for, craving, getting, or buying pizza, excluding retweets, in English from January 2014 – December 2016. We found over a million mentions.

Breaking down the data by day of the week reveals subtle but clear differences between days when people want pizza. 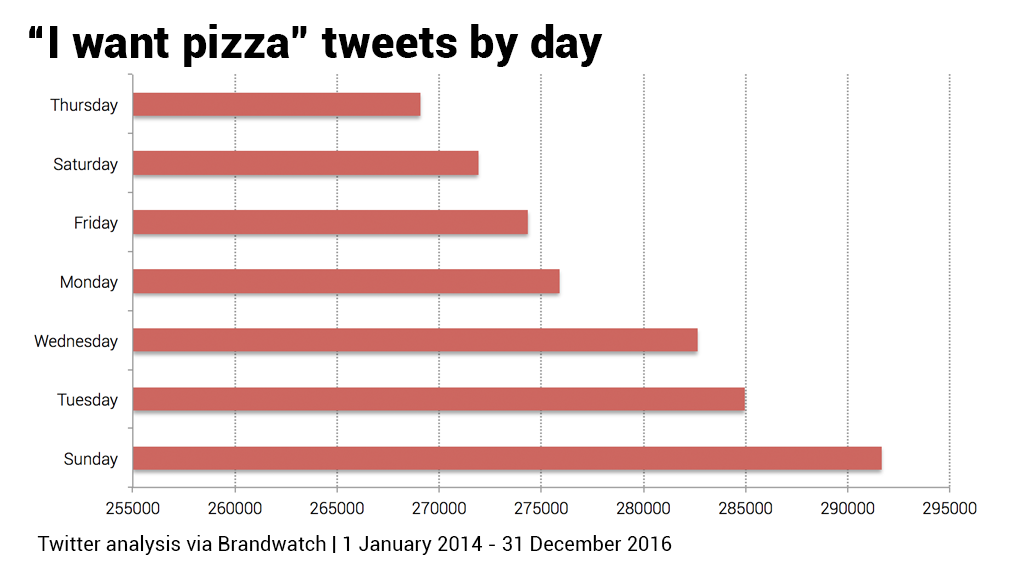 Well, that depends on the day.

Generally, 7pm ET appears to be the peak time for talking about wanting pizza.

However, breaking that down by day reveals slightly different patterns on each day of the week. For example, Tuesday sees a spike around 1 and 2pm, as well as later in the day. This could be indicative of the two-for-Tuesday style deals that are popular in the UK (when dinner time is around 1pm ET) as well as similar deals in the US.

Sunday, the most popular day to talk about wanting pizza, has no significant spike but maintains a consistent number of “I want pizza” tweets across the day after 1pm. Pizza is, of course, a wonderful hangover cure.

Unexpectedly, the time we are most likely to talk about pizza on Twitter varies with gender, too.

Why does this matter?

Analyzing when people are most likely to be interested in a certain product or food type is valuable information for marketers in those fields. When cravings hit, a visible ad or well-timed email with a deal could be enough to push a wanton pizza lover over the temptation edge.

For example, pizza-related community managers may be interested to know that New Yorkers are most likely to vent their pizza cravings around 6 and 10pm on Twitter.

Knowing when an audience is online is just one example of a whole array of social insights a platform like Brandwatch can offer. Want to find out what else we can do? Get a demo now or check out our wide range of case studies to find out how some of the world’s leading brands have used our platform.

Are you a journalist looking to cover our data? Email us at [email protected]