Post-truth, alternative facts, and fake news have become popular phrases, but can we measure the effect? The Brandwatch React team is on it with the data.

Welcome to the third and final edition of our Brandwatch React Brexit data analysis series.

We’ve previously looked at what young people and people outside of the UK are saying about Brexit, but this time the Brandwatch React team wanted to take a look at the role of “post-truth” politics and “fake news” in the conversation.

Earlier in the year, in the wake of the Oxford English Dictionary making “post-truth” word of the year, we discussed living in a post-truth era and whether fake news made Donald Trump President. 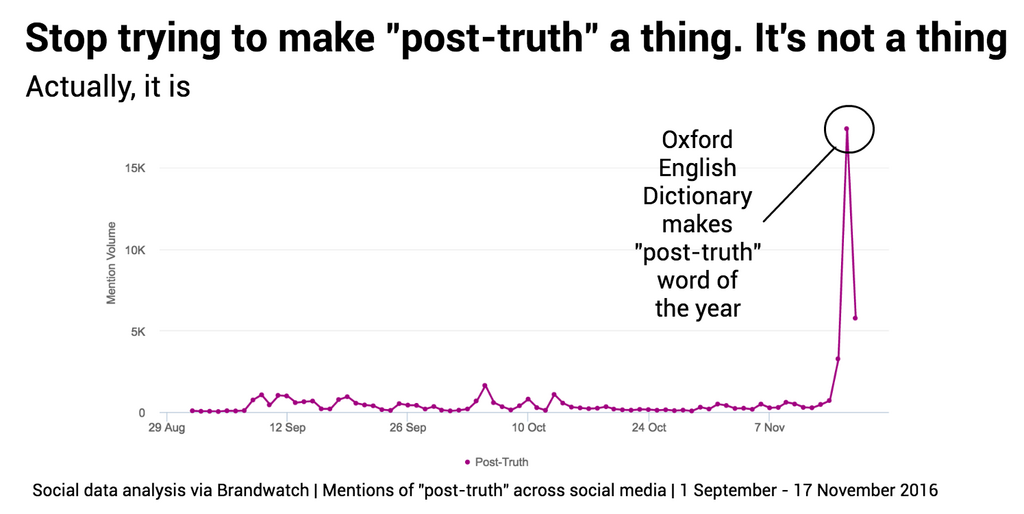 Kellyanne Conway’s “alternative facts” comments, as well as Trump’s fondness for the term “fake news”, have become enormous issues for debate online and are significant parts of the post-truth atmosphere in which we supposedly live.

For context, the OED defines post-truth as:

Relating to or denoting circumstances in which objective facts are less influential in shaping public opinion than appeals to emotion and personal belief.

These circumstances weren’t just present in the US Elections.

The EU Referendum campaigns were littered with wild claims about the state of the United Kingdom if it were to stay or leave.

Dubious claims surrounding immigration, the economy, and the NHS appealed to fears surrounding overcrowding, financial instability and healthcare provisions. Figures were inflated, the campaigns’ arguments and numbers clashed, and hundreds talked about being confused and undecided online.

Post-truth, alternative facts, and fake news may now be key parts of our vernacular, but can we measure the effects?

According to YouGov , the top three remembered events in the lead up to the EU Referendum were components of key arguments belonging to Brexiteers.

These controversial topics were hugely salient in the press as well as in personal debates that took place.

We thought we’d focus on two points of contention that plagued the EU Referendum debates – the claims that Turkey could join the EU and that leaving the EU would free up £350m for the NHS.

Taking a look at mentions surrounding these points revealed the extreme divisions in what was believed.

Turkey to join the EU

That Turkey (and various other countries) could be joining the EU, and that citizens of those countries would therefore be allowed free movement into the UK, was a hotly debated topic, despite there not being concrete evidence to prove that it would or wouldn’t happen.

While some believed they could be joining, others were convinced that they wouldn’t be. This topic cloud, generated using Brandwatch Analytics, shows the top mentioned terms surrounding Turkey within the EU Referendum conversation.

The fact that authoritative figures for both the leave and remain campaigns were pointing in different directions only confused things further.

We are paying almost £2bn for Turkey, Albania, Macedonia, Montenegro and Serbia to join the EU. How will our NHS cope? #bbcqt

Meanwhile, key figures in the leave campaign famously drove around in a bus that claimed we send £350m to the EU each week, and that this could be redirected towards the NHS instead.

As the Independent reported, this claim was quickly abandoned after the result came in.

The figure wasn’t quite what it seemed either (the below video explains why).

The UK does not send £350m a week to Brussels that could be spent on public services https://t.co/YIZv9iWnKx #EUrefhttps://t.co/9W0yL1EQDx

We found thousands of people quoting the £350million figure, and its use was mixed.

Many used it to support their arguments or in retweeting Vote Leave. Around 25% of the 3k £350m tweets we tracked between 1st April and 22 June 2016 (within a 10% sample of Brexit-related mentions) were simply retweeting the Vote Leave campaign, who used the figure prolifically in their online communications.

#voteleave and save £350 million a week! That's more hospitals,schools and elderly care that we NEED!#VoteLeave

We don't give £350 million to the EU every week. I was going to vote leave but If you tweet that again, I'm voting remain

Following Suit: What Do Those Outside of the UK Think Of Brexit?

Tracking lies across the internet presents its challenges, and they’re similar to those that social networks currently trying to tackle fake news are currently grappling with. Tracking false information back to its roots isn’t necessarily difficult, but identifying it before it is picked up by lots of people is no easy task.

Technology might be smart but there’s no easy “spell check” for what’s true and what isn’t. And if there was, it could present all kinds of ethical problems – think the Ministry of Truth in Orwell’s Nineteen Eighty-Four, or how annoying all those red lines would be if you were writing satire or fiction.

The boundaries of our post-truth world are yet to be established, but the trend of falsehood spreading like wildfire, particularly when our realities are shaped so prominently by filter bubbles and algorithms, doesn’t appear to be over yet.

Article 50 will be triggered next week, sparking the beginning of Brexit negotiations. How many lies will be told in the process and how will social media react? We’ll keep an eye on the data.