The way people talk on social media can be very different to how they talk in person. This means that the learnings from traditional focus groups often contrast greatly with what’s found from social media monitoring.

Does that mean one should be ignored in favour of the other? Not at all. There are a number of possible reasons for the different findings, but it is those relating to honesty and anonymity that are the most important to evaluate when cross-referencing sources.

Focus groups are a method of market research that has been around for decades. The prominence of account planning in advertising means that campaigns now rely heavily on consumer insight; and focus groups remain one of the key means of obtaining this.

The benefits of running a focus group are clear – they are a great way for brands to learn about consumer’s experiences in granular detail and understand more about the relationship between the brand and that person. They can also test out ideas and gain live feedback, drilling down into areas of interest to see what works and what doesn’t. 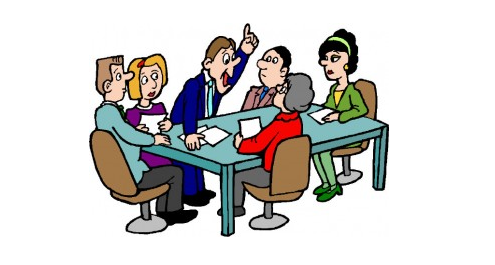 You only have to have watched an episode or two of The Apprentice to come across how much insight can be gained (and ignored) from focus groups.

In the last few years, increasing consumer adoption of social media and the growth of consumer conversations taking place means a new research opportunity has opened up. With so much being said about brands online, companies are looking to advanced social media monitoring (link) tools like Brandwatch to help them make sense of the information and turn it into powerful insights.

It’s becoming a key research tool with several distinct advantages. A key factor is that the conversations being monitored are in the public domain – the process doesn’t require people’s active cooperation so there are no financial or practical restraints to the sample of users that can be accessed, which means it’s great for gaining a big picture. Additionally, the method requires little planning, making it useful for ad hoc and short term projects. It’s also inexpensive, time-efficient and requires few personnel to execute.

(Have a look at how social media monitoring can help you here, or learn more about how Brandwatch works here.) 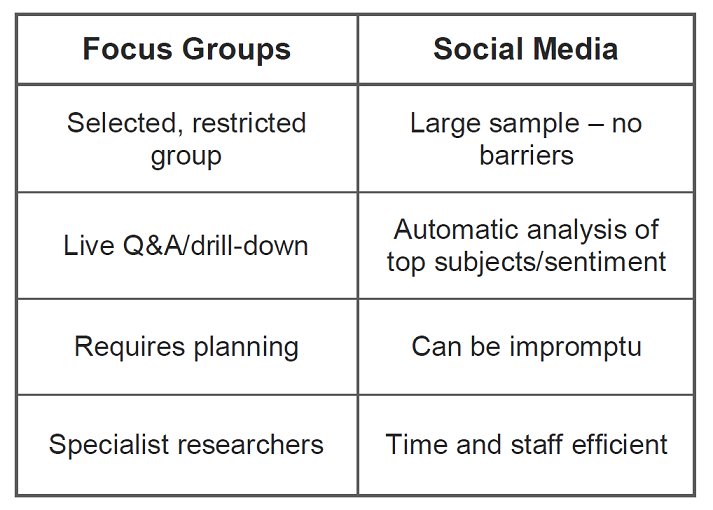 The Key Difference: Honesty and Anonymity


In Truth, Lies and Advertising, Jon Steel wrote at length about his experiences with focus groups and their advantages and pitfalls. He talks about the importance of asking the right questions (open and not leading) and creating the right atmosphere to draw deep and genuine consumer insights.

One of the major points Steel pulls out is around the honesty and the bias people display in focus groups. More often than not, the groups comprise people from similar age groups and demographics who would consequently consider fellow members their potential peers. Straight away, there are implications of how people wish to be thought of – when being asked to give genuine unbiased accounts, faced with total strangers, few people really lay bare their feelings without influence from those around them.

During some agency work for a credit card company, I once observed a focus group where the members were asked to talk about their experiences with the company and how they viewed their relationship with them. The company specialised in sub-prime credit, which meant a lot of their customers had at some point been in debt or struggled financially.

My overall observations from the focus group were that the members spoke confidently about money, saying they were and always had been able to manage their finances and implying that they had only taken the credit card out as a one-off and were never controlled by it. On a lot of points, there was a lot of nodding and agreement, even on occasion from members who had previously expressed opinions to the contrary.

A separate part of the project meant that leading up to the focus group I’d spent a lot of time on personal finance forums reading posts from past and current customers of the client. What struck me when reading these was how candid people were about the precise amounts they were in debt, how it had happened and how they felt about it – in fact a convention was to list in your post footers the various debts you had acquired and how you were dealing with them.

In forums, users can hide behind avatars and handles that mean nobody knows who they really are. There is sense of protection that encourages people to reveal far more truth about themselves than if they had to deal with the face-to-face reactions of strangers. Whatever they say to people online has in many ways far less consequence than in person; if others disapprove or disagree with them they can simply be shut out, there is a unique element of detachment, comfort and safety.

Only by taking on board the findings of both research methods did it become clear what the key insight was on this occasion: while some people are keen to tackle their debt issues and desperately seek advice from others privately, saving face ultimately takes precedent in most situations where others are present.

Personal finance isn’t a unique subject in how people say things with their image in mind. Jon Steel refers to examples from when he had travelled around asking people about beer. He found that people frequently claimed to prefer the typically stylish premium, imported brands of beer yet, once he’d spent an evening at a bar with them and witnessed them in their natural habitat, they displayed no preference at all and in fact settled for the cheapest available more often than not. Social media is an equivalent to the bar – a place where people don’t feel like they are being analysed or judged and therefore speak and act freely and truthfully.

What people say is extremely affected by what they think they should say, how they would like to come across and what people have said before them.

A lot of this comes down to how exposed people feel when in front of strangers in person with nothing to hide behind.

This is where social media can introduce a unique opportunity for research; the security of the online world, especially the anonymity of forums, can encourage a level of honesty that many people simply don’t feel comfortable with in person.

For this reason, in order to gain an authentic and comprehensive understanding of consumer attitudes and behaviour towards brands and related issues, it’s imperative that multiple research methods are employed and cross-referenced accordingly.