When I dive into a Brandwatch dashboard, what I normally expect to see is Twitter dominating the mentions count.

Every brand likes to think they are doing well, and seeing your Twitter metrics increasing over time is surely an indication of what a splendid job you are doing, right?

You should never count your social chickens before they hatch.

Many community managers are guilty of just counting the numbers, and not considering the wider context within which they exist.

They are instead happy to present a picture perfect illusion of increasing figures to their line managers to display what a great job they’re doing.

It’s only when you start to scratch below the surface and understand what’s going on beyond the numbers that a closer approximation of the truth is revealed.

I am going to tell you a little secret.

Most active brands will see an increase in their social media mentions over a selected time period.

You don’t have to do much really, a post here, the occasional retweet.

Therefore, numbers (followers, mention counts, RTs) going up is not always an effective indicator of your owned account performance. In fact, it is only part of the story.

Let me give you some background.

Since the launch of Twitter, naturally the amount of active users has been increasing year-on-year.

On average, 64 million active users have joined the platform every year since 2011, and this trend is expected to continue with 63 million additional users to join Twitter by the end of 2014.

With the steady growth of the platform comes a wider audience that are more likely to follow and engage.

This can also be applied to other social networking sites, such as Facebook, where likes and fan numbers will continually increase due to a large audience presence.

When you instead account for the increasing audience and look at mentions occurring across other sites that aren’t experiencing such rapid general growth (like those outside of social networks), the variation between the amounts of brand mentions only have small fluctuations each month, and on average remain steady.

If you do not exclude large marketing events and campaigns, it would be likely that you would always see a steady increase in tweet volumes (and other social network metrics) organically.

The main point to take away from this is the concept of context.

These measurements are totally restrictive and I believe in looking at the bigger picture.

Knowing your growth rate in relation to that of your competitors’ allows for a greater comprehension of the industry’s development and your own successes.

If you were the community manager at Burger King and you received 10,000 new Twitter followers this month, that may very well seem like an astounding achievement.

When surveying the contextual social leaderboard, you’re right at the bottom.

This is where social media monitoring comes into play!

Being able to compare your digital footprint compared to your competitions’ can be crucial. Comparing the relative growth of your presence across different platforms is a similarly powerful weapon.

And, trust me, seeing your marketing initiatives payoff is even better when you are winning the contextual social race.

Measuring what is happening on your social networks isn’t always about measuring the big numbers.

Sometimes it’s the engagement on a particular post which can be the most precious piece of information.

If you have a small but active fanbase on Facebook, then your profile is arguably far better than that of a big brand with millions of likes yet receives little interactions on their posts.

One million silent, uninterested followers is no better than none at all. 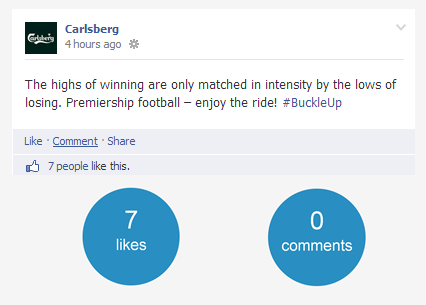 Remember the end goal isn’t always just on social, there will often be a further desired action (measured in clickthroughs rather than likes).

What can you do?

Research and evaluation is key to understanding the stats surrounding your social networks.

Take a step back, breathe and realise it’s not all about the high numbers in social.

Remember what you are aiming for and then come up with a structured plan to achieve it.

Start by looking at your market and what your share is – how does this relate to your social presence?

Scrutinize your competitors by completing a comparative analysis and keep track of it each month.

Finally, continue to look beyond the basic social media stats and begin to contextualise the data with the world it lives in.