React: Should Motorola Be Listening To Twitter? Well, Yes.

Our new piece of research looks at the social media, forum and blog posts about the previous lines of phones over the past two months. We've crawled over 127,000 posts in total, giving us a pool of 31,021 unique authors to look at. We've dissected what people say about the Moto X, Moto G and Moto E.

Over the past decade, Motorola has changed.

After building the most prolific feature phones of all time, the company was left failing after the iPhone changed the game.

The company has been moved around with splits and acquisitions a surprising amount over the past four years. Google acquired the mobile division in 2011 for $12.8 billion, before selling it to Lenovo in 2014.

The phone was so successful that Motorola decided to update the model a year later. Sticking the same simple, cheap design philosophy, the phone was another hit.

Another year has passed, and Motorola is teasing another iteration of the phone. On July 28, tech blogs are expecting Motorola to unveil their 2015 suite of phones.

Everyone’s quite excited, but expectations are set high for the new batch. With Chinese competitors like Huawei entering the market – and growing at an unbelievable rate – Motorola’s next phone needs to better than just ‘cheap and solid’.

But what are people expecting? Historically, phone manufacturers haven’t been good at giving people what they actually want.

They can’t be blamed, either. It’s hard to listen to the wants, needs and desires of millions of mobiles phone users.

At least, it used to be.

Our new piece of research looks at the social media, forum and blog posts about the previous lines of phones over the past two months.

Most speculation and buzz has been around their flagship phone – the Moto X.

With over 50,000 online mentions in total, it’s received almost twice the attention of the more budget Moto G.

Broadly, the conversation around these phone are overwhelmingly positive. Researching most topics with social media will returns mountains of cynicism. All of these phones have a net sentiment score of over 70% positive – for the Moto X it’s almost 90%

This is reassuring news for Motorola, but it’s not particularly useful. Manufacturers improve by finding out what people hate.

A little bigger, a little faster

Even though the majority of posts were positive, we still found hundreds of people who had issues with the phones.

A quick overview of the negative topics allows us see what’s wrong. 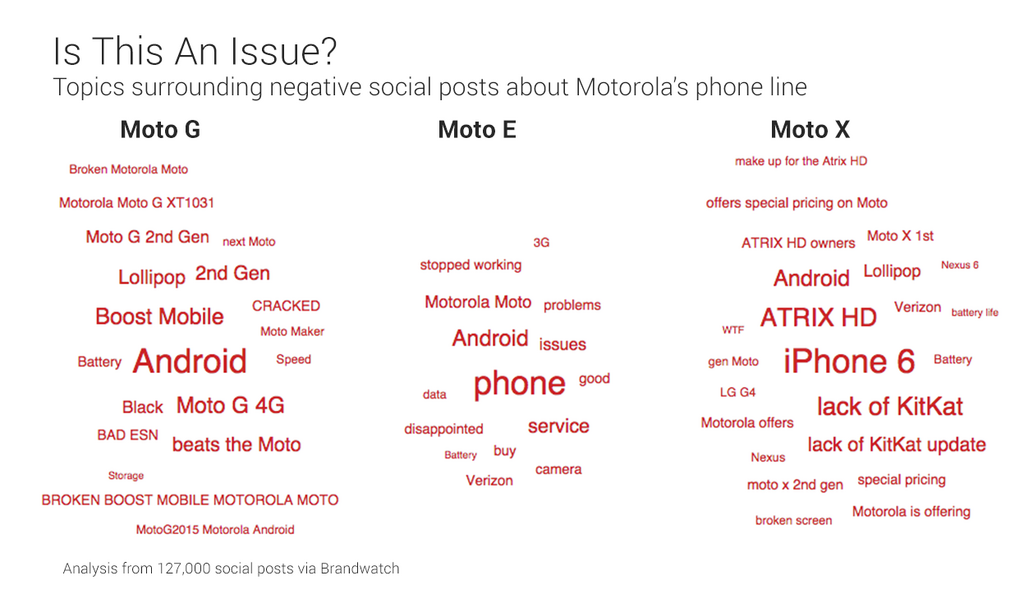 Clearly, each phone has different issues.

The Moto G breaks after a while. The Moto E encounters manufacturing issues. The Moto X is frequently compared to even more high-end phones like the iPhone 6 and Atrix HD.

Some social media posts and bloggers offer their opinion on how to improve these phones. Some are asking for better battery, some are asking for a larger screen, some for features such as a fingerprint scanner to rival the iPhone 6.

Most people are looking forward to a larger screen – probably helped by the number of convincing leaks from inside Motorola.

Screens have mentioned 2,147 times over the last two months.

Battery life and rumors of a fingerprint scanner are still high on the buzz lists, but nothing seems to be topping the prospect of more space to tap away at.

As we race towards July 28, the velocity of conversation is speeding up.

We’ll be analyzing the reveal as it happens, to learn if the new phones hit the mark.

Read more: React: Apple Pay Working? Not for These Thousands of People