The Brandwatch React team explores a social media storm surrounding United Airlines, and how it could have been better contained.

United Airlines has been embroiled in a social media storm after a member of the public began tweeting about an incident involving two young women wearing leggings attempting to board a flight.

What happened quickly turned into a social media frenzy surrounding the policing of women’s outfits.

As passengers prepared to board a United Airlines flight on Sunday, one traveler named Shannon Watts noticed two young women were stopped at the gate. She posted a series of tweets to her thousands of followers describing what she was seeing.

1) A @united gate agent isn't letting girls in leggings get on flight from Denver to Minneapolis because spandex is not allowed?

3) Gate agent for flt 215 at 7:55. Said she doesn't make the rules, just follows them. I guess @united not letting women wear athletic wear?

The posts received thousands of retweets and the story began to trend as many condemned what was happening. Among the mass of tweeters commenting on the incident were celebrities Chrissy Teigen, Seth Rogen, and Patricia Arquette.

Watts later admitted that she wasn’t aware of the full context of the situation when she began to tweet about it. A spokesperson for United Airlines revealed that the passengers were using special free passes for employees or family members and that those using these passes are subject to a dress code – one that the young women were apparently fine with.

The extent of the damage 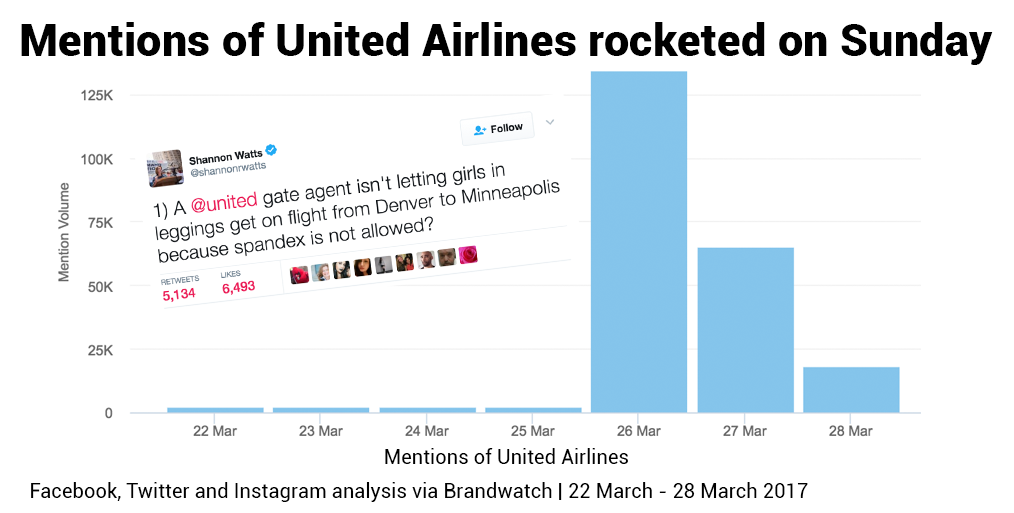 The mentions were largely negative, too, with a switch from 69% positive on March 25th to 69% negative on March 26th when looking at sentiment-categorized conversation.

The story about the two young women wearing leggings has undoubtedly been the most prominent part of the United Airlines-related conversation over the last week.

Delta wasted no time in taking advantage of the opportunity.

Flying Delta means comfort. (That means you can wear your leggings. ?)

There is still a fair amount of backlash surrounding the dress code and handling of the incident – Watts has said that while she didn’t initially know that the girls were using passes that carried a dress code, “I don’t get why that’s the issue here” – and the United Airlines Twitter account, which defended the actions of employees, has been subject to intense criticism.

When a social media crisis is kicking off, a brand needs to be ready to act appropriately.

This is a key reason why Brandwatch’s Signals and Alerts were created – to notify the relevant people when there’s a sudden change in the conversation. For example, if there’s a sudden increase in mentions, an influencer discussing the brand, or a sharp shift in sentiment, the people who need to know can be alerted before a spark in mentions turns into a social inferno.

While United Airlines was quick to respond on social, a lightning-fast reaction isn’t always the right one. Given the sudden volume of conversation surrounding the incident, the airline may have done better to gather the appropriate individuals to craft a considered response containing all of the facts as quickly as possible.

As Kellan Terry, one of our resident social data analysts, puts it, “once the fire starts to burn, it’s all about containing that fire.”

How social analytics works at scale at the world's best airline. 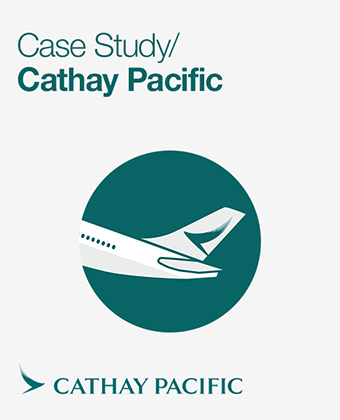