Talking Meaningful Data and Design With The OCR and Katja Garrood

As part of our Now You Know Conference last month, we assembled a “crack-team of design data commandos” to get together on a panel and discuss data vizualisations, design, and how to make social data meaningful.

Brandwatch’s Creative Director Katja Garrood was joined by Ian Ardouin-Fumat and Genevieve Hoffman of The Office for Creative Research for an open conversation hosted by Brandwatch CMO Will McInnes. 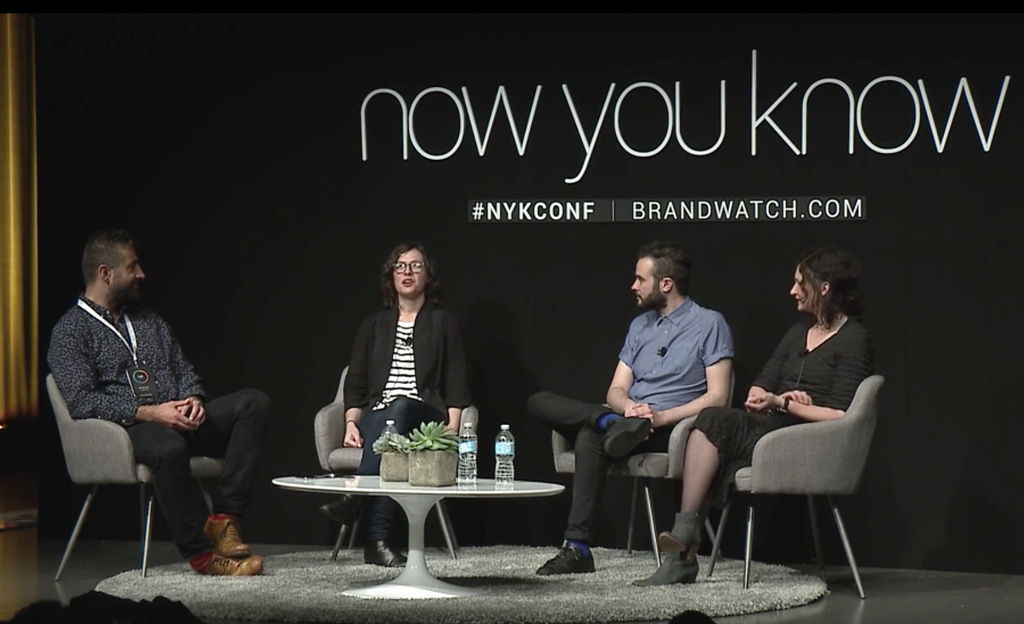 First, a little background on The OCR.

Based out of Brooklyn, New York, the organization of creatives describe themselves as a hybrid research group.

As Creative Researcher Ardouin-Fumat explains; “We explore the intersection of arts, science, and data. We create a lot of data visualizations because that’s the core of our practice, to explore data and inspect how information impacts culture, politics, arts, and science.”

The team is relatively small, but makes a big impact. Ardouin-Fumat gives us a little more insight into how the team works.

“We’re a very small studio of between nine and 12 people, pretty much depending on the season, and the main common denominator is that we’re all designers and or programmers.

All of us come from very different backgrounds. Genevieve comes from fine arts, I come from interaction design, we have another colleague who is an architect, we’ve even had music composers, all kinds of backgrounds that really fit into that creativity process.

That’s where it gets very interesting, because we know for each project we’re going to assign different people because they will bring their diverse sensibility to the issues that we’re treating. That’s a very rich process.”

First things to go on the walls of our new studio? These maps of all of our hometowns! pic.twitter.com/SRPYLvotoO

Garrood, a 10-year Brandwatch veteran, explains succinctly how her time at the company has evolved. “I’ve spent my time at Brandwatch learning to fall in love with the unruly, chaotic nature of social data and looking to find ways to make it meaningful in a visual way.“

Stay with us while we learn more about the marriage of design and data, what success looks like, and the future of the data visualization.

Will McInnes: Let’s talk about design and data. Why are they nestled together?

Geneivieve Hoffman: Well, I think the missing word from that equation is visualization.

What we do with data, a lot of it is driven by analytics and data sets which are primarily numeric, but in order to make that understandable or more meaningful to a wider audience, designing and visualizing that data is really core at giving meaning to what can be an overwhelming kind of spreadsheet or numeric system. So that’s at the core of what we do.

McInnes: So the purpose of design is to help find the meaning?

Hoffman: Yes, I think so. Ian Ardouin-Fumat: What I would add is that I think it gives you a framework, a methodology to read data. Design is really a methodology you can apply to many different fields, and it’s a creative framework to read the information and figure out what’s the most meaningful way to represent it.

It’s essentially a toolbox to analyze things in a creative way. It gives you answers, intuitions on how to treat data, and then through a process, a very rigorous design methodology you can validate those intuitions and test them with users.

Katja Garrood: Yes. I like the way it reveals things. Design is incredibly powerful in the way that we can use it and exploit it to reveal stuff that wasn’t obvious before.

Ian and Genevieve from OCR are totally wowing the audience at #NYKCONF https://t.co/kSLptIxI94

Taking inspiration, and working with intuition

McInnes: This is a classic kind of question in this domain, but where do you take inspiration from?

Hoffman: The internet, a lot of the time. Tumblr. Usually I’m not looking at other data visualizations to find inspiration. I’m looking at graphic design, I’m looking at ways that different people have chosen color, or decided, in terms of posters, what to make the most kind of graphic or important part of the layout.

Inspiration as a designer can be everywhere and anywhere at once. I’m constantly taking down notes when something comes across my screen or path.

What are you looking for when you’re collaborating with people – what gets the best out of the project? What needs to go in to get the best work, in your experience? 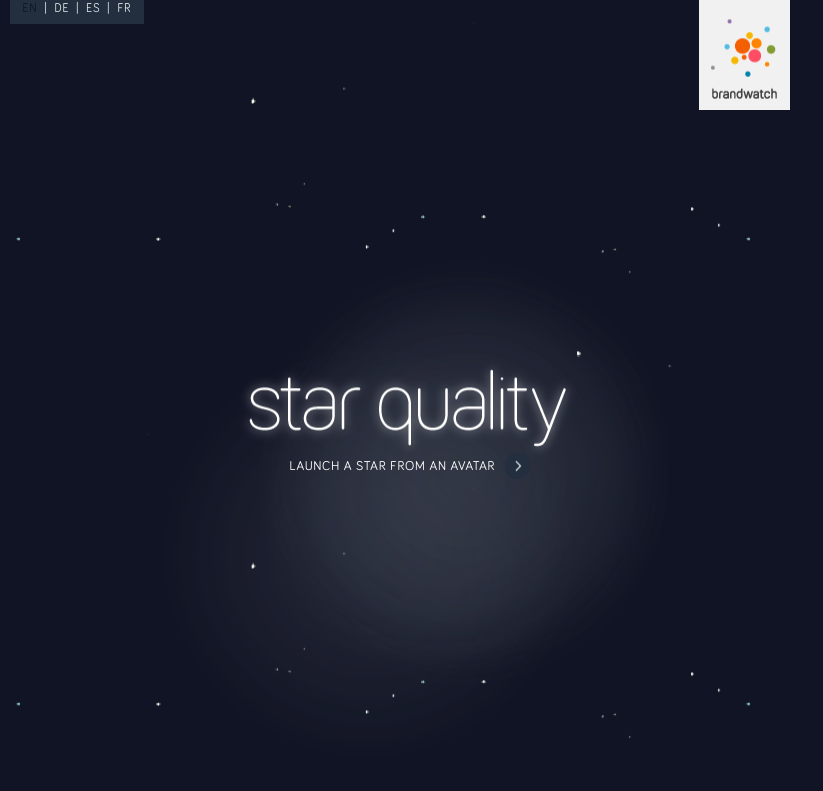 Garrood: As designers we’re driven by finding the most original way to express a story. There are many ways of telling a story, and people come in from different backgrounds. I like very much having an interesting, eclectic, eccentric in some cases, team because they all bring a uniqueness to the pot.

And originality. If we achieve that, it can be the differentiator, especially in a crowded space.

I feel very driven by trying to be as original as possible. Going as mad as you can and allowing that. You have to edit, you have to refine, you have to strip back to get it to a place that it’s robust enough to sit in a product like Brandwatch.

But that process is important…and experience. I know that I just made so many mistakes early on – trial and error of what data can do and how it can beat you up. You definitely get wiser as you move along in this space. 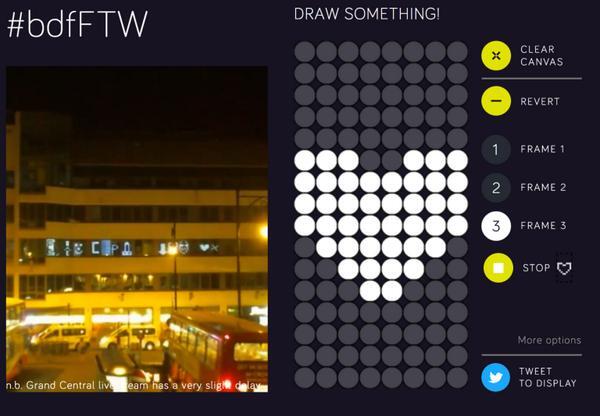 Ardouin-Fumat: Yes. That back and forth between prototyping and sketching on notebooks is really what leads us towards meaning, because we always start every single time a client comes to us with a data set, we have intuitions – and with experience you have more and more intuition about what the data is going to look like.

It feels like the data has a texture, a shape by itself that you want to reveal with design.

So you’re going to have intuition on how to reveal those patterns. Then you start playing with it. You start mapping that on your computer or whatever medium you’re using and you realize the data actually doesn’t fit the mental model you had of it, and you have that learning moment.

Then you think, “Oh, okay. That’s it. That’s the right way to represent the data.” 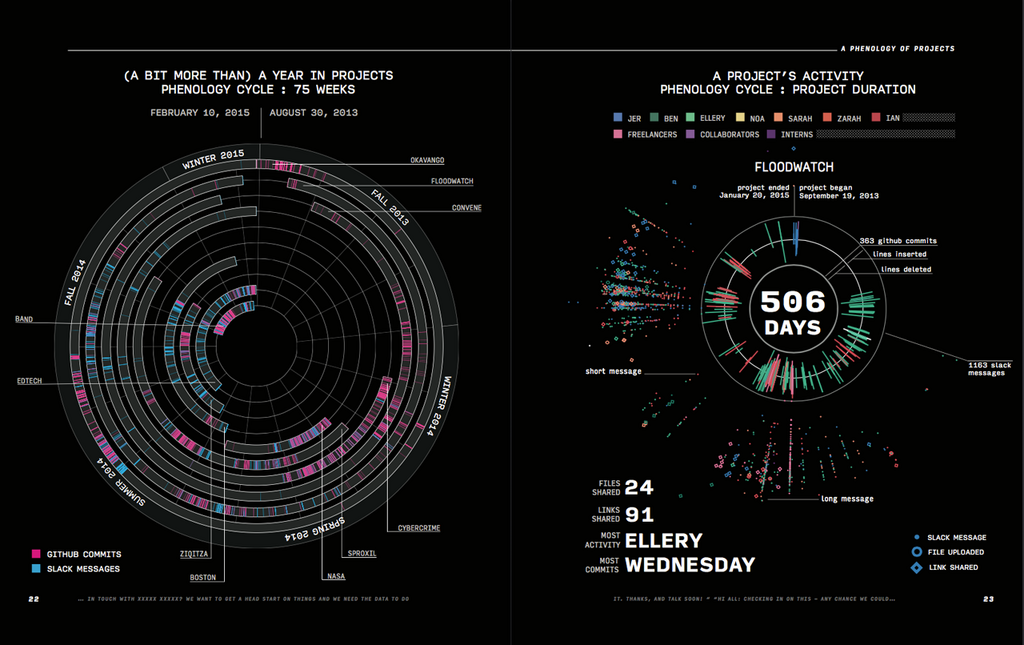 McInnes: It’s sounding like quite hard work to me!

Hoffman: It can be, but I think the hard work is in making the ultimate visualization as easy to understand as possible.

So it does take a lot of iteration to get to that point, but if the end product is not understandable to people, then we haven’t done our jobs right.

McInnes: So, how do you know when these projects are successful? Ian, Katja, Genevieve – what puts a smile on your face?

Ardouin-Fumat: So we could be measuring success with the number of views we get on our prototypes, but let’s simply be honest about it, we’re a little too weird to do that.

Audiences, of course, are very important metrics for us and we want to be relevant to the general public and to our clients. But I think on a more personal level, to me the right way to describe success is creating that moment where people exclaim, “Oh! It’s spectacular, it’s pretty, it’s engaging, it really attracts the eye and it’s beautiful.”

The data looks beautiful on whatever medium you’re using. But then, you want to create that second moment, that, “Ah!” where people not only saw something cool but they learned something.

There’s the, “Wait a minute. What is this thing I’m seeing here?”

You engaged them to a level that’s far beyond simply conveying a message. 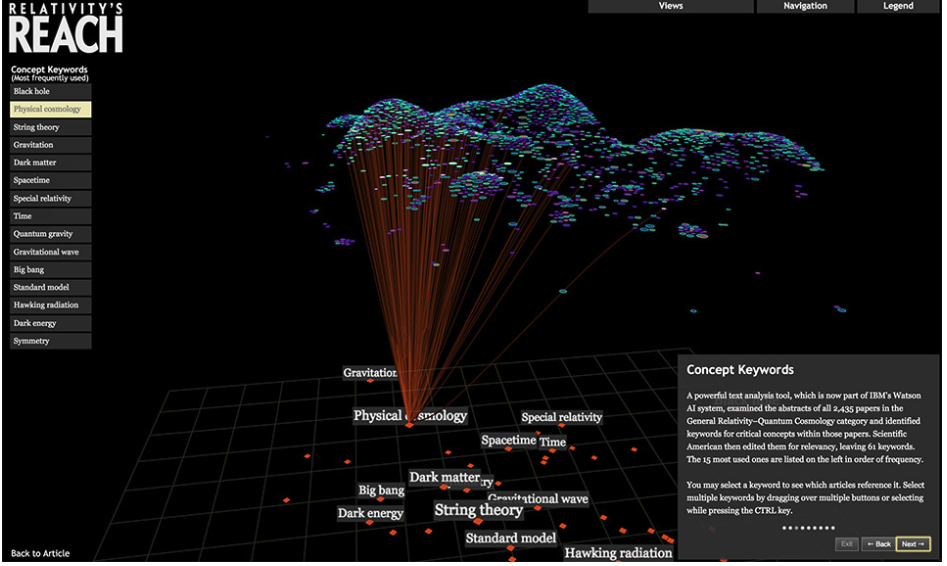 Hoffman: Sometimes we know a project has been a success from direct feedback. I get emails from some outside readers who take the time to actually get in touch, which is always the best.

When things do get picked up and sort of go viral, you have moments of like, “Wow, this went completely beyond the audience that I had thought would be interested.” Those are always really exciting.

The future of the data viz

McInnes: What’s unexplored terrain when it comes to visualizing data? For me, there was a project that I really liked which was trying to turn data into sound. What would you love to work with?

Garrood: I know what I’d love to work with. I know we have a lot of engineers at work who would like to explore this – and it would be sound. We’ve had this idea about how would a boolean query sound? If the sentiment was low, and it was a very gloomy topic of conversation and you played your query, would it be like Wagner? I don’t know.

Ardouin-Fumat: It’s called sonifying the data. We worked on a project where we created a data visualization that showed a face for botnets based on their behavior, and also sound.

We gave botnets a voice, which was very exciting because all of a sudden those very abstract networks acquired personality. Giving personal ID to data is such an interesting goal to achieve, because then you make the information much more relatable.

The caveat is that sound is very hard to achieve, because data sounds weird most of the time.

Hoffman: Physicalizing data is a vague interest of mine, a big passion.

I think there’s something when you take it out of the screen and have a real relationship with things of different size that corresponds to your data set. It becomes so much more, I don’t know, like significant, like the scale of what you’re working with instead of just sort of a dashboard of numbers.

And VR. VR is something that I think is going to happen very quickly and you’re going to be able to put on your hollow lens or whatever it is and walk through your datascape.

Ardouin-Fumat: There’s really anything you can do with data. That’s the beauty of it.

Thanks to Ian, Katja and Genevieve for taking part. We’ll be following The OCR’s upcoming projects with a keen eye – you can keep up with what they’re up to here.

We’ll be sharing more insights from this year’s Now You Know Conference in the coming days and weeks. Keep us bookmarked, and follow us on Twitter: @Brandwatch.